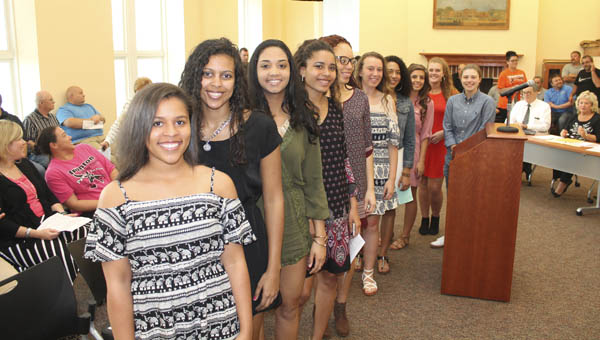 The Ironton High School reading room was standing room only for the Ironton Board of Education meeting Tuesday, where the board recognized and honored the 2015-2016 Ironton Lady Fighting Tigers basketball team on its undefeated regular season and 27-1 record overall.

Board member Dr. Burton Payne said the board was proud of the team’s accomplishment.

“It was a great season,” he said. “An undefeated regular season and going 27-1 probably won’t happen again for a long, long time.”

Head Coach Doug Graham introduced the players who were there and talked about coaching his team.

Ironton Mayor Katrina Keith, whose daughter was also on the team, spoke about the team from the city’s standpoint, as well as from a parent, thanking and recognizing all of the parents for everything they did throughout the season.

Graham then presented the board and Keith, on behalf of the city, commemorative basketballs signed by the team, as well as team photos.

Another plaque was given to Graham for the team’s locker room from Ironton superintendent Dean Nance from the board.