Students get a taste of traditional music 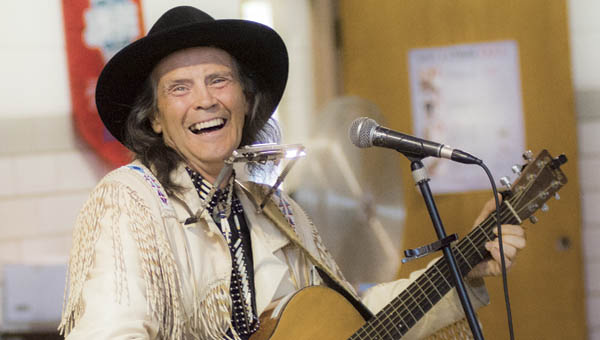 Artist Steve Free performs for students Tuesday at St. Lawrence School in Ironton. Free has performed all over the United States and Canada and has been featured on PBS, TNN and NPR.

The students of St. Lawrence School clapped along to Native American music and learned about the culture on Tuesday when internationally acclaimed, award-winning singer and Native American activist Steve Free performed at the school.

Free is an Appalachian, Native American culture and folk artist. He and was named an Official Ohio Treasure by the Ohio Arts Council in 2009, honored by the Kentucky State Senate for his “artistic excellence and musical contributions to Appalachia” in 2010 and has performed on NPR, PBS, TNN and all over the U.S. and Canada, as well as traveling to schools.

“I teach the Native American history and culture of southern Ohio,” Free said of his performances at schools. “We go to schools all over the state and all over the country.”

In between songs, Free, who was also playing guitar, harmonica and flute throughout the performance, taught the students various words and phrases in Navajo, and the difference between a prayer and a chant.

A chant ends in a down note and a prayer ends in an up note.

Free is the winner of numerous Music Industry Awards, including nine ASCAP Awards, a Platinum Record and a Grammy nomination and has charted over 30 songs on the National and International Americana, Country and Billboard Charts with 15 No. 1s.

Along with Free, band members John Starkey accompanied on bass and Susan Free on backup vocals, flute and percussion on Tuesday.