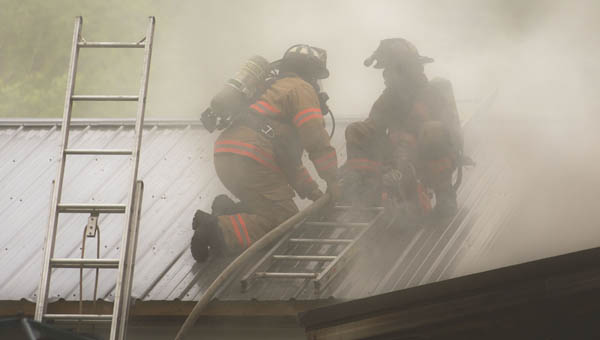 Firefighters work to put out a house fire on County Road 119 Thursday afternoon.

UPPER TOWNSHIP — A house fire destroyed a home on County Road 119 off State Route 93 Thursday when the homeowner was trying to be a good Samaritan and help save a trapped woman after a car accident.

“The car went across all four lanes, struck an embankment and the car flipped,” Call said. “The driver was the only occupant in the vehicle and was transported to Cabell Huntington Hospital for treatment, but it doesn’t appear to be life threatening.”

Driving the vehicle was Toni Christian, 38, of Leesburg, Indiana, who is in fair condition according to the hospital.

Before crews arrived at the scene of the car accident, homeowner Danny Krum said his wife, who is an Ironton bus driver, was on her way to her afternoon bus route when she saw the accident.

“She was the second person on the scene along with a sheriff’s deputy,” Krum said. “She gave me a call and said a woman was trapped in the car and there was only one other person there. I panicked, jumped in the car and left the house and forgot everything on the stove that was cooking. Twenty-five minutes later, my house was gone.”

“When we got here, it was blazing. Within four minutes, it was through the roof,” Sherman said. “By the time the second team went in, it flashed on them in the back of the house. One firefighter burned his ear and two overheated.”

Sherman added that once the fire got up into the attic, it spread across the whole house and firefighters had to break all of the windows and cut a hole into the roof for ventilation.

No one was in the home at the time of the fire, however, Krum said that he lost one dog in the blaze.

Rome Township resident Maggie Gue with her invention Save Your Seat. The disposable cover is placed over your child’s car... read more