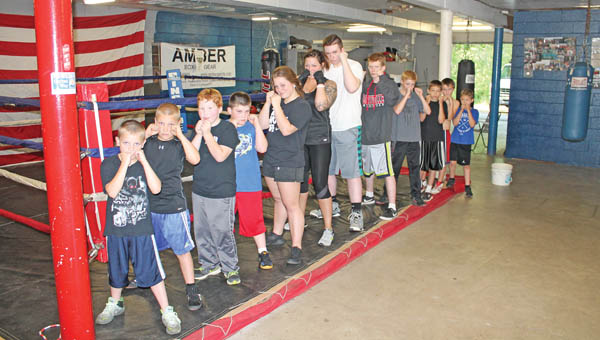 WESTWOOD, Ky.–– Just past Fairview High School on Main Street sits the Westwood Boys and Girls Boxing Club, where children ages 8-18 from throughout the Tri-State train to box and compete in the boxing Junior Olympics.

“I’ve been here since the 1970s,” boxing coach and trainer Tommy Hanshaw said. “Everybody that was anybody in boxing to come out of this area came out of the Westwood Boys and Girls Club. We get kids from everywhere.”

Once a child turns 18, they can no longer compete in Junior Olympics competitions, but some come back and mentor at the gym.

Hanshaw said for many years after the club was started, a lot of children did not come to the gym, however, recently the club has started to pick back up.

Crystal Waulk, club fight organizer, said she sets up fights every weekend, or every other weekend.

“We usually fight at least two or three times a month,” she said.

Waulk’s daughter, Amaya Waulk, 15, of Coal Grove, has a chance to compete at the Junior Olympic Regional tournament in Cleveland later this month.

“I’ve been boxing for four months,” she said. “I really enjoy Tommy (Hanshaw) coaching me.”

Club executive director John Jervis said the amount of children that come to the gym to train and box fluctuates depending on other sports’ seasons going on.

“The club is well-structured and they care about the kids,” said Alicia Smith who helps out as a mentor. “They also learn valuable things like discipline and respect, and it’s a really good workout.”

SOUTH POINT — An elderly man lost control of his vehicle and crashed into the new Family Dollar in South... read more