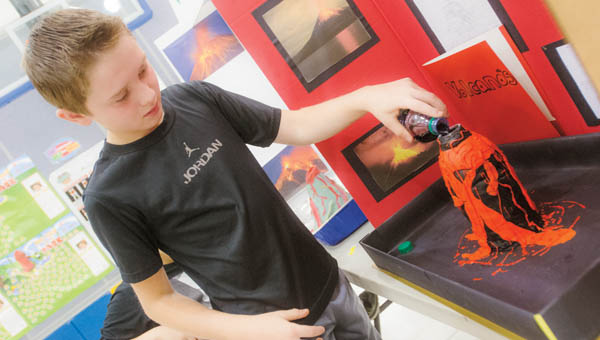 BURLINGTON — More than 50 students presented their projects to judges on Tuesday at Burlington Elementary’s science fair.

Jeff Heinl, who teaches science at the school, said all students from the school’s fifth grade took part.

“It’s a great way to introduce them to the scientific method,” he said.

He said many of the students did an experiment, testing a hypothesis. However, it was not required.

Some of the children,instead, opted to research a topic that interested them and present their report.

Burlington’s fair was somewhat different from other area school fairs, in that students were allowed to have props in addition to the presentation boards, allowing students to bring in items from their experiments, as well as construct models.

Kaelin Jones tested whether she could make a glass disappear to the eye.

To do this, she submerged a small glass into a larger vat of corn oil, with the light being distorted through the mixture and making the glass appear to vanish.

“I like volcanoes,” he said. “And I wonder why they’re always erupting.”

He researched and presented a report, and built a scale model out of clay, which was air dried.

Luke Burcham used the science fair to delve further into his interest in trains.

“My project is on the 600 series locomotive,” he said. “I’ve loved it ever since I was a little kid.”

“I’m interested in them and wanted to see how they form,” she said.

In addition to a report on the various classes of tornadoes, she made a replica of a tornado, by putting two bottles end to end. When flipped, the water, mixed with glitter, drained from one bottle to the other, with the coriolis effect creating a whirlpool.

Johnson Taylor wanted to find out which beverage is more likely to stain a person’s teeth.

He hypothesized that the coffee would stain the most, and his survey found most people agreed.

But, from the results of his experiment, he learned that grape juice topped the list.

“In the future, I’ll do more beverages — apple juice, orange juice and cranberry juice,” he said.

Zoe Adkins tested which foods would mold the fastest.

For her experiment, she put milk, cheese, bread and bananas in her mother’s cabinet for a week.

She predicted cheese would mold fastest, but, on day four, she saw that the milk went bad first.

While Heinl said the fair was exclusive to the school and not a qualifier for further competition, students with the top three projects would receive ribbons.

Closures may cause delays on U.S. 52

COAL GROVE — Motorists on U.S. Route 52 near the Ashland bridges may experience some delays for the next two... read more