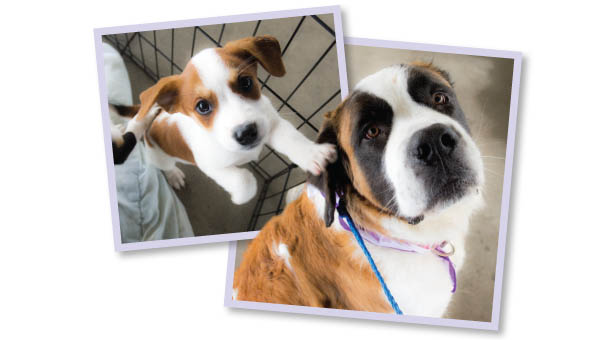 (LEFT) Puppies are up for adoption. (RIGHT) Two-year-old Shelby Belle attended the Bark for Life event at the Lawrence County Fairground.

ROME TOWNSHIP — About 14 dogs and their owners turned out for the Bark for Life event Saturday at the Lawrence County Fairgrounds.

“Bark for Life is an organization that the American Cancer Society created for animals,” Melanie Kerstetter, of the Lawrence County Relay for Life committee, said. “So many animals are companions for those who have cancer and other illnesses and we want to celebrate them.”

Kerstetter said this year was the third or fourth time Lawrence County has hosted a Bark for Life event, and although sometimes it’s sporadic, it’s something the Relay for Life committee tries to do every year.

This year’s event had homemade dog treats, a kissing booth, various contests and whipped cream puppuccinos for the pups, as well as a variety of vendors set up, including the Aloha Pet Resort in Proctorville, the Proctorville Animal Clinic passing out dog food and treat samples, Damsel in Defense, Mary Kay, Avon and Relay for Life teams that set up tables including Kerstetter’s team “Grey Matter,” set up for brain cancer awareness because her son is battling brain cancer.

Contest winners from the event were Chevy, the dog of Beth and Glenn Dye, of Wellston, winning best trick, Abbie, the dog of Kassie Roble, of South Point, winning the pet/owner look-a-like contest and Daisey and Shadow, entered by groomer Kim Holycross, winning best personality.

The Lawrence County Relay for Life event is scheduled for Friday, June 11 at the fairgrounds from 6 p.m.-midnight. A survivor’s dinner will start at 6:30 p.m. for cancer survivors and a guest and a luminary ceremony at 10 p.m as well as bands and entertainment throughout the event.

Art sale set for May 28 at OUS

Locals artisans and crafters will put their work on sale at an event at Ohio University Southern on Saturday, May... read more