Bring your A game 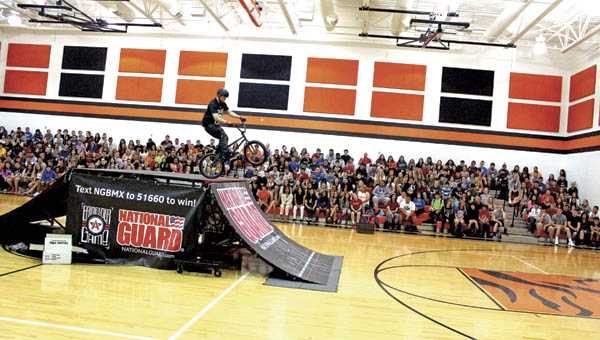 BMX riders from action sports entertainment company, AGA Nation, were flying high, flipping and doing tricks all over the Ironton High School gym Monday morning, as the students were treated to the “Bring Your ‘A’ Game to School” assembly on the seniors’ last day of the year.

AGA Nation and the National Guard team up to bring the assembly to schools across the country throughout the year. The assembly’s message is to spread positivity and do your best in everything that you do, headlining the seven core values of the National Guard, loyalty, duty, respect, selfless service, honor, integrity and personal courage, and the core A’s of “Bring Your A Game to School,” alliance, attitude, authentic, ability, active, anti- bullying and achieve.

Among some of the stunts the riders completed Monday were jumping over six people, including four students, and catching air off of the ramp and flipping over Ironton High School principal Joe Rowe.

Numerous T-shirts were also thrown out to the students during the show as well as a pair of Beats by Dre headphones raffled off to a student who filled out a National Guard card.

“This is the first time we’ve had this assembly here, but we have a really good relationship with Sgt. Book and Sgt. First Class Hatfield from the National Guard that do a lot for us and brought this assembly here,” Rowe said. “The show was really good and really entertaining because it’s a lot of the things that appeal to the students right now. We have a lot of skateboarders and students who do BMX, so it appealed to the kids.”