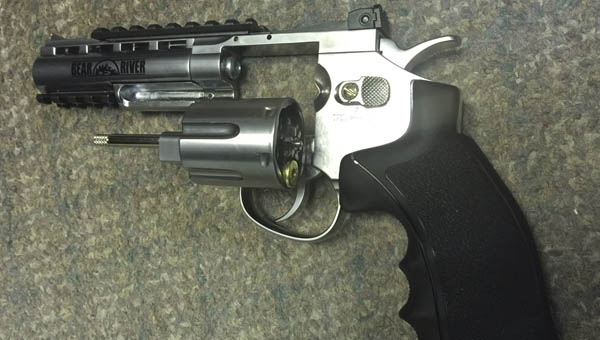 A BB/pellet gun found at the Ironton riverbank during clean up day on May 7.

A realistic looking BB gun was recently found on the riverbank during Ironton’s cleanup day, and police are warning parents to caution their children about using them.

“One of the city workers found it and initially he thought it was a real gun,” Ironton Police Chief Dan Johnson said. “It’s a BB gun, but you can still hurt someone with them. Kids will have them, even though they aren’t allowed to fire them in city limits.”

Johnson added that the BB gun looks and feels like a large handgun.

“If a police officer approached someone pointing this ‘toy’ at them, it would most likely not end well for whoever was holding it,” stated a post about the gun on the Ironton Police Department Facebook page. “Parents be warned, don’t let your children play with toys that look like real weapons.”