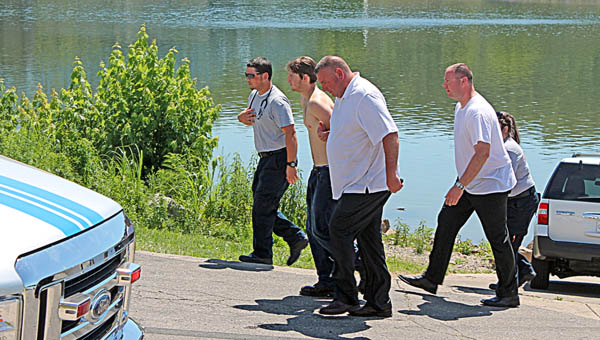 Lawrence County Sheriff’s Detective Aaron Bollinger assists Derik Berry, who was rescued after driving a vehicle into the river following an alleged burglary.

A man who drove a vehicle into the Ohio River on the Center Street landing sometime just before 3 p.m. on Monday is facing burglary charges. Derik Berry was arrested after the rescue.

“We got a call from a witness that someone had driven a vehicle into the river,” Capt. Pam Wagner, of the Ironton Police Department, said. “When we got here, there was a male subject out in the middle of the river.”

Wagner said that she, Sgt. Jamie Pruitt and Officer Steve Breeding with the Ironton Police Department, along with Lawrence County Sheriff Jeff Lawless and sheriff’s detectives Aaron Bollinger, Brad Layman and Jason Newman, all went into the water to retrieve the suspect.

“Once we got him out of the water, he was transported to the ER,” Wagner said. “As far as we know, he was the only one in the vehicle.”

All parties that assisted in getting the suspect out of the water are in good condition besides minor cuts and abrasions, and the suspect was taken to the St. Mary’s Medical Center – Ironton Campus, where it would be determined if he needed more extensive treatment elsewhere. Tetanus shots were also administered to a few officers due to stagnant water of the Ohio River.

According to the police report, prior to the river incident, Ironton police were dispatched to Park Avenue Chiropractic on a theft complaint by victim, Kenneth Dickess, who said he received a call from his landlord, Bill Elkins, stating that a worker in Dickess’ van was seen leaving his residence with a television.

Dickess said he called his worker, Derik Berry, and asked where the TV was before allegedly finding Berry at the Ironton Chiropractic in the van with the TV in the back. After confronting Berry about the situation, Berry fled the scene. While officers and Dickess were dealing with paperwork, Berry drove the vehicle into the river.

Once Berry was taken out of the water, he appeared to be under the influence of some type of narcotic and was unable to answer questions, according to a police report. He was placed under arrest for burglary.

The Russell Police Department and Russell Fire Department assisted in bringing a dive team to help retrieve the vehicle.

Berry will also be taken to Athens or Huntington for a psychological evaluation, according to a police report.

Strawberries morning dessert of choice for those at market

Saturday’s strawberry festival kicked off the season of food fests by Ironton In Bloom. The second Saturday in each month... read more