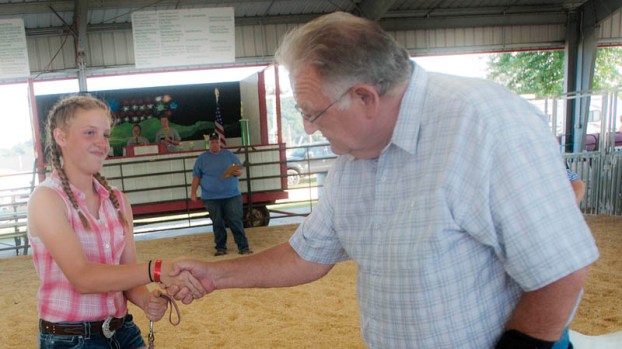 ROME TOWNSHIP — Lawrence County 4-Hers who raised goats showed off their animals in the Lawrence County Fair livestock arena Sunday evening, competing for the top prizes in the dairy, pygmy and breeding/meat production categories.

“It feels really good,” Brock said about winning. “I really like raising goats.”

Brock said this was the second time that he’s entered goats for competition at the county fair.

Coming in second and claiming the reserve champion in the dairy goat category was 15-year-old Connor Franklin, of Scottown.

“It’s mine and the goat’s first year, so this is surprising,” Franklin said. “I like raising dairy goats because of the free milk, and goats are like big dogs. They’re so lovable.”

Franklin said that although he has raised goats in the past, this was the first time he’s entered them in county fair competition.

“It feels good to win,” Gracie Daniels said. “I’ve raised goats before and I really enjoy raising them.”

“It brings me a lot of joy,” he said of winning his prizes. “I’m very happy with the way it turned out.”

Placing second and receiving the reserve champion for the senior class showman was Dylan Back, 16, of Kitts Hill.

“A lot of hard work goes into these goats,” Back said. “And it pays off in the show ring.”

Back said this was his second year raising goats for the county fair.

There were no pack goats at this year’s fair.

ROME TOWNSHIP — Young farmers brought their chickens to be judged at the Lawrence County Fair on Saturday. Members of... read more