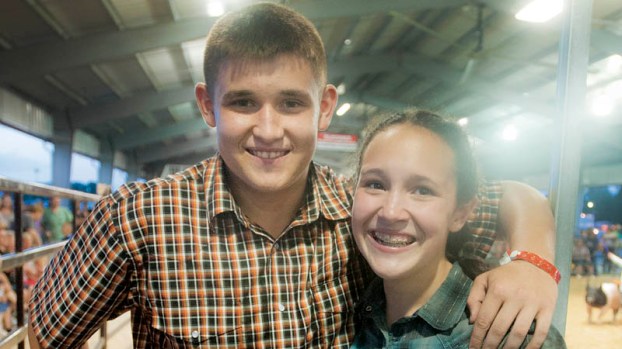 Brother and sister Hunter and Meredith Humphreys after sweeping the market hog show Tuesday at the Lawrence County Fair.

ROME TOWNSHIP — A dream come true is what 13-year-old Ironton resident Meredith Humphreys described as how she felt after being named grand champion of market hogs Tuesday evening at the Lawrence County Fair.

“I’ve wanted this for so long,” she said. “I worked so hard, and it just feels like I’m on cloud nine.”

This is the fifth year Humphreys has been involved in 4-H with the Starlite club, raising hogs each year.

Humphreys beat out more than 150 hogs and 4-Hers who took to the livestock arena to claim the honor, with her first choice of hog for this year’s project.

“I’ve come in third before, but I’ve never won grand champion,” she said. “It feels like a dream.”

“It feels good,” he said. “We thought we could compete pretty well this year.”

Hunter’s been involved with the Starlite 4-H club for eight years raising hogs.

“I like the challenge of raising them,” he said. “Then I bring them to the fair and see how well they can do.”

Along with winning the reserve champion, another of Hunter’s hogs received third place overall. He has also claimed grand champion honors twice in the past.

Being involved in 4-H is a family tradition for the Humphreys, as this was the third generation to receive grand championship honors in Lawrence County.

“My dad, my brother and both of my kids have won grand champion honors in Lawrence County,” Darrell Humphreys, Meredith and Hunter’s father, said. “It’s a family project.”

He added that last year didn’t go so well, so it was good to bounce back this year.

“It was a great show. There were a lot of hard-working kids from throughout Lawrence County with excellent projects,” he said. “Last year was a rough year for us, but this is a really sweet night for the family.”

Brothers have the chops