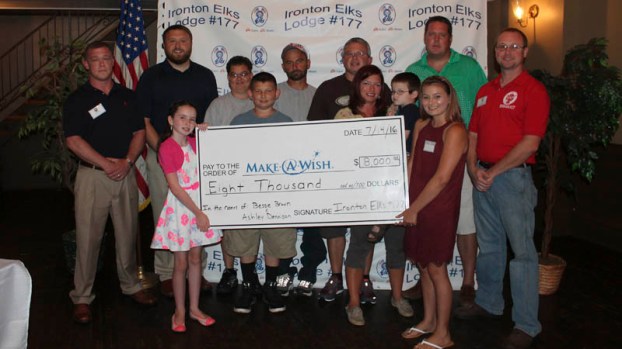 Lawrence County cancer survivors Beth Ann, 10, of South Point, and Ashley Dennison, 17, of Willow Wood, hold a check to be donated to the Make-a-Wish foundation in their honor by the Ironton Elks Club. Behind them are members of the Elks Club and both of their families.

An $8,000 donation was made to the Make-a-Wish foundation from the Ironton Elks Club in honor of two Lawrence County cancer survivors who have experienced Make-a-Wish themselves.

“The past few months we’ve been raising money to fully fund the wish of a child through the Make-a-Wish program,” J.T. Holt, exalted ruler of the Ironton Elks, said. “We did it in the honor of two Lawrence County children who have survived cancer. We wanted to recognize them and the struggle that they’ve been through.”

From August of 2011 to November of 2013, 10-year-old Beth Ann Brown, of South Point, battled Acute lymphoblastic leukemia, and completed her Make-a-Wish trip to Disney World almost two years ago.

“The Make-a-Wish foundation is a great program,” Tracey Brown, Beth Ann’s mother, said. “We spent a week at Disney with nothing to worry about.”

She added that a bonus surprise awaited Beth Ann when she got there, having the opportunity to meet two of her favorite princesses, Anna and Elsa from Frozen, and spend an hour with them.

“That was my favorite part of the trip,” Beth Ann said. “I’ll always remember it.”

Dennison battled Kidney Cancer at 14 years old and overcame it a year later when she was 15.

“I loved my Make-a-Wish,” she said. “Going to Disney World was the most fun week of my life.”

Ashley’s mother Melissa Dennison said she appreciates everything that was done for Ashley throughout the community and through Make-a-Wish.

“A lot of people have done a lot for us,” she said. “And it feels good for someone else to experience a Make-a-Wish in her honor.”

“It would mean a lot to us knowing what we went through and having another child experience a Make-a-Wish in our daughter’s honor,” he said. “It’s a great organization with great people and it’s a once in a lifetime deal. We’re privelidged to be where we’re at.”

The Ironton Elks Club spent the past six months raising money through its annual golf scramble, drawings and donations. On Thursday, the club hosted a dinner for the families, where the check was presented before being donated.

ROME TOWNSHIP — The Oak Ridge Boys were the headline entertainers for the week and took the stage at the... read more