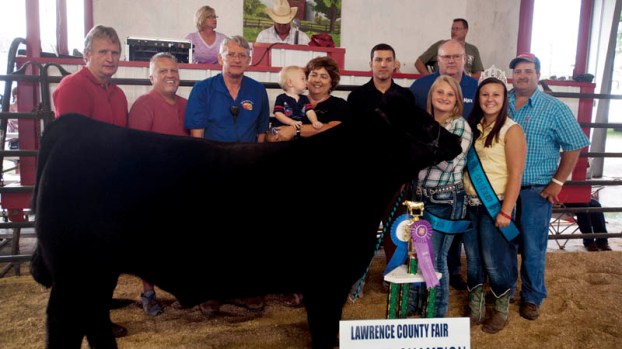 Large animals auctioned off at fair

ROME TOWNSHIP –– Bidders from throughout the county packed the barn area of the Lawrence County Fair for the large animal auction, featuring the market steers, market lambs, market goats and market hogs.

“I enjoy coming out to the fair and supporting the kids every year,” Patrick Leighty, Lawrence County Engineer, said. “I usually bid in both the small and large sales.”

Market steers kicked the auction off with grand champion winner Matison Klaiber, of the Starlite 4-H club, showing off her 1,271-pound animal.

The winning bid came in at $5.50 per pound, totaling $6,990.50 from buyers Mike Finley, of G and G Properties, Bret Guy, of Guy’s Floor Covering, Randy Lambert, of the Lawrence County Fair Board and Lambert Law Office, Terry Taylor, of Citizens Deposit Bank, Matt Klaiber, of Blue Grass Maysville Stockyard, and Rich Donohue, of Rax in Ironton.

Market lambs followed up the steers with grand champion Ethan Cade, of the Starlite 4-H club, showing off his 133-pound lamb to bidders.

Morgan Saunders, of Holzer Health Systems, was the top bidder at $11 per pound, totaling $1,463.

Next, reserve market lamb champion Jacob Cade, also of the Starlite 4-H club, brought his lamb of 136 lbs. to the show area for bidders.

Rounding out the auction were the market hogs, where grand champion Meredith Humphreys, of the Starlite 4-H club, showed off her winning 269-pound hog to bidders.

The winning bid came in at $12.50 per pound, totaling $3,362.50 from buyers Bennett, Watson, Burcham, Malone, Holliday and Joe McMaster, of Collins Career Center.

“It’s all about the kids,” Collins said. “These are some of the best kids in Lawrence County, and 4-H instills great values in the kids and teaches them the right things. It’s been a great week.”

Lawrence County treasurer Stephen Burcham said he enjoys helping the kids out through the auction each year.

“A lot of the kids spend a lot of time with these animals, and it’s a lot of work in addition to school and other things,” he said. “This is a reward for them. Most of the kids will use the money for a college fund, and I’m glad to help kids that are looking to forward their education.”

ROME TOWNSHIP — 4-Hers parted ways with their livestock at the small animal sale at the Lawrence County Fair on... read more