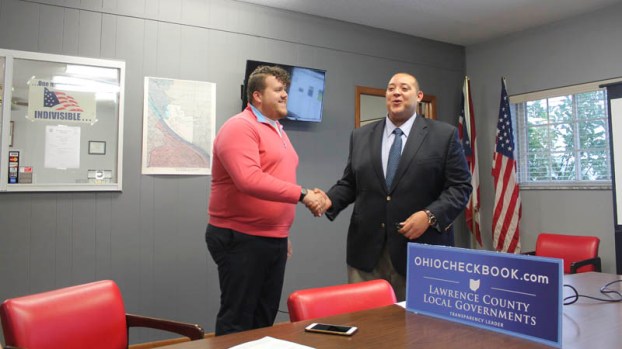 COAL GROVE — The village of Coal Grove and Elizabeth Township became the second and third entities in Lawrence County to allow government transparency through OhioCheckbook.com, an online initiative created by Ohio Treasurer Josh Mandel’s office, following Proctorville, that went transparent through the program earlier this year.

The initiative was launched in December of 2014 and puts all state government spending on the internet for the public to see.

“I believe the people of Lawrence County have a right to know how their tax money is being spent, and I applaud local leaders here for partnering with my office to post the finances on OhioCheckbook.com,” Mandel said in a statement. “By posting local government spending online, we are empowering taxpayers across Ohio to hold public officials accountable.”

On Thursday, Josh Burton and Jamie Barker, from Mandel’s office, met with Coal Grove fiscal officer Dylan Markins and Elizabeth Township fiscal officer Angie Kisor to go over the different features of the website and display how it works.

“The best part is that it’s all about power to the people,” Burton said. “It allows every citizen to hold elected officials accountable.”

Burton said that before the initiative was launched, Ohio was ranked 46th out of 50 states in transparency, but now ranks No. 1 in the nation.

“These leaders should be applauded for the work they’re doing and volunteering to put Coal Grove and Elizabeth Township’s spending online,” Burton said.

“I’m thankful for Josh Mandel for providing us with a tool for taxpayers to use,” Markins said. “It’s so important for local taxpayers to know where the money is going.”

An ordinance that will provide new dumpsters to the city of Ironton passed Thursday evening at the Ironton City Council... read more