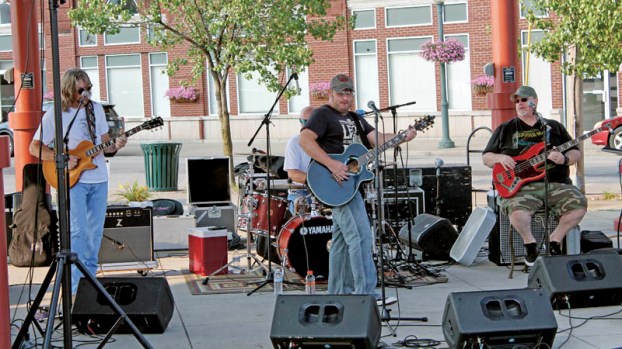 Larry Pancake and his band performed Tuesday evening at the Ironton Farmers Market as part of the Glockner Summer Concert Series.

Nashville recording artist and singer/songwriter Larry Pancake and his band took over the stage area Tuesday evening as part of the Glockner Summer Concert Series at the Ironton Farmers Market.

Pancake and his band, Mark Allen on guitar, Bill Fraley on bass and Dewey Frye on the drums play country/rock music with a wide variety of influences mixed in. Pancake performs both original music as well as covers.

Raised in Flatwoods, Kentucky, Pancake has had numerous songs featured in TV and documentaries all over the world and has appeared in several regional TV and radio commercials.

Pancake has had three studio albums on indie label 9 Lives Records, and spends his time performing at fairs, festivals and theatres. Over the years, Pancake and his band have performed as both main and supporting acts, sharing the stage with many world wide artists.