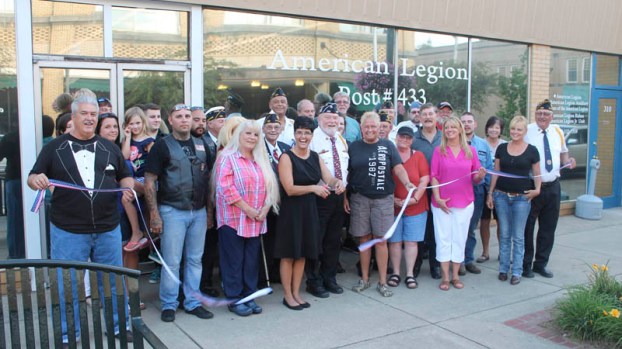 A place of their own

This past Thursday, Ironton American Legion Post 433 hosted a ribbon cutting with Ironton Mayor Katrina Keith to mark the opening of its new post home, between the Ro-Na Theater and Unger’s Shoes on South Third Street. The post has been around since 1955 and originally called Memorial Hall Home, followed by its meetings in the Ironton City Center.

“We’ve always wanted our own building and this is the first time our post has ever had a liquor license,” Frank Murphy, post commander, said. “It’s the first time that we’ve had a place of our own.”

Murphy said the post is always accepting new members, and that you don’t have to be a veteran to be a member of the American Legion.

Owner of the building, Jeff Howard, who is also a member of the American Legion Post 433 Riders, said he’s happy that the veterans and other members of the post have their own building now.

The post took possession of the building May 1 and a total transformation began including floors, walls and installing a bar. There are also two handicap accessible restrooms.

Howard’s parents, Charles and Irene Howard, previously owned the building and ran a furniture and appliance business for 45 years.

“My father was a Navy vet,” Howard said. “He’d be very proud to know there’s a veterans organization in here now.”

The post had its grand opening this past Friday following the ribbon cutting on Thursday.

“Anyone can come to the door and we can sign them up,” Murphy said.

The post also offers a designated driver van for those in Ironton and parts of Hanging Rock and Coal Grove.

“If they call the post, we’ll pick them up and then take them home,” Murphy said. “The van runs on donations.”