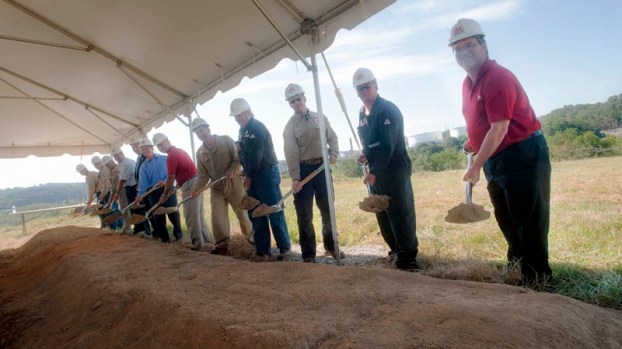 CATLETTSBURG, Ky.–– The first dirt was tossed Tuesday morning during a groundbreaking ceremony for the new central control facility that will be built at the Catlettsburg Marathon Refinery.

Refinery general manager Brad Levi gave a welcome before talking about the impact the project will have on not only the refinery itself, but the entire community, calling it an opportunity to move Catlettsburg forward.

“This is a big step forward for the refinery,” he said. “We’re moving from five distributing control rooms throughout the facility to one central control room. It’s great for the community, great for Catlettsburg and great for the longevity of the plant.”

Kentucky Rep. Rocky Adkins, D-99, was on hand to speak at the ceremony as well.

“These are the types of investments we need to really build the economy in the way we want to see,” he said. “…It’s a tremendous day for our region, for the Commonwealth of Kentucky and the entire Tri-State.”

The facility is set to be completed by the end of next year with all operations moved in by the first quarter of 2018.

A place of their own