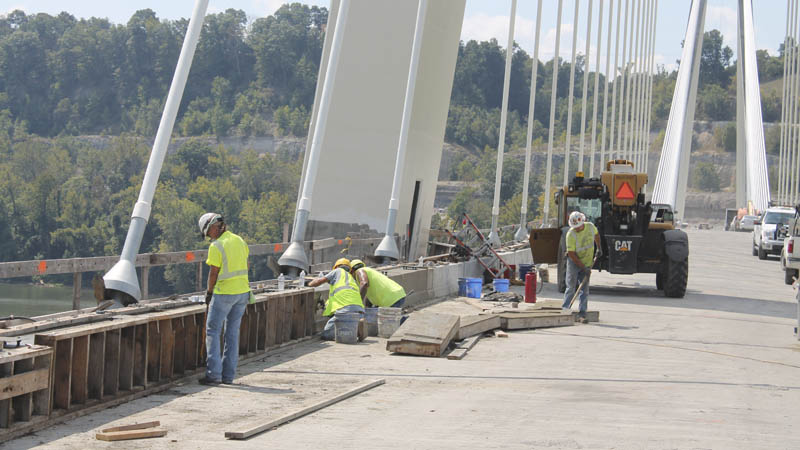 Construction workers on the new Ironton-Russell Bridge complete work on the bridge’s parapet walls that line the side of the roadway Wednesday afternoon.

With the public opening of the new Ironton-Russell Bridge scheduled around Thanksgiving, workers continue the final steps toward its completion.

Currently, the bridge’s parapet walls on each side of the roadway are being built as well as painted after they are installed, and high molecular weight methacrylate (HMWM) concrete sealer is being poured to seal remaining cracks and joints in preparation for the final overlay, which is set to be poured around Sept. 19.

“We’re getting closer to getting the project wrapped up this year,” Kathleen Fuller, public information officer of the Ohio Department of Transportation District 9, said. “We’re still looking at just prior to Thanksgiving having the bridge open to traffic.”

Beginning Friday, crews will be finishing some minor road work on the Kentucky side, where the bridge connects to U.S. 23. Paving will be done in the median as well as some traffic line painting at the new bridge approach, which may cause some delays.

“U.S. 23 will remain open to traffic, but there may be some lane restrictions,” Fuller said. “There will be law enforcement or flaggers maintaining traffic, and it may carry into Saturday.”

Brayman Construction, out of Saxonburg, Pennsylvania, has been working on the bridge since construction began in the spring of 2012.