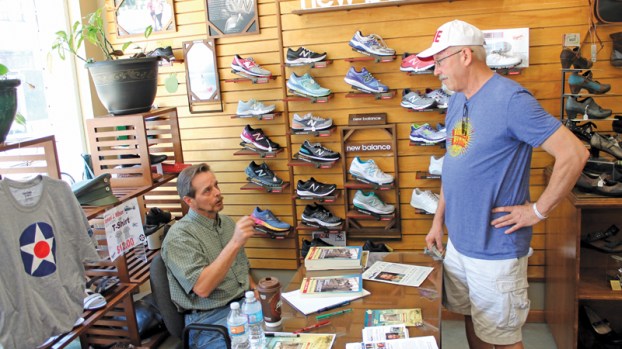 A book signing for “Bill Lambert: World War I Flying Ace” at Unger’s Shoes on Saturday brought community members to the store to meet University of Rio Grande history professor and author of the book, Samuel Wilson.

Lambert, a native of Ironton, flew for the British Royal Air Force in 1918 and became the second highest scoring ace in World War I with 22 victories, the most achieved by an American at that time before being surpassed by Columbus native Eddie Rickenbacker, who racked up 26 victories. Lambert later transferred to the U.S. Air Service.

The book takes a closer look at the life of Lambert and his experiences in the war.

“I began working on the book in 2008, and it just recently got published,” Wilson said. “I wrote an article about him in the late 90s and was interested in doing something more about him after that.”

On hand at the book signing was Ashland native and personal friend of Lambert, Bill Martin, who Wilson said helped him a lot with the book.

“Bill (Martin) was able to save all of Lambert’s things. That made the book possible,” Wilson said. “It took a long time to sort through everything to write the book, but I was able to use Bill (Martin) as a source.”

Martin said Wilson has been a pleasure to work with throughout the process of putting the book together.

Martin said the load included photos, uniforms, model plane parts and more, which he used to create one of the Highlands Museum and Discovery Center’s first exhibits.

Martin said since, he has donated everything that he had from Lambert, to the Aviation Museum of Kentucky in Lexington, Kentucky, the Lawrence County Museum, Wright State University and the National Museum of Air Force in Dayton.

Ironton Mayor Katrina Keith was at the book signing as well and made a proclamation to make Saturday, Sept. 10, 2016, Bill Lambert Day in Ironton.

The book is available online at Amazon, McFarland Publishing, through the Jesse Stuart Foundation and at local book store outlets, although Wilson said to call local book stores first to make sure they have it.

Joe Unger, owner of Unger’s Shoes, said it was a pleasure to host the book signing at his store.

“This whole experience has been over the top,” he said.