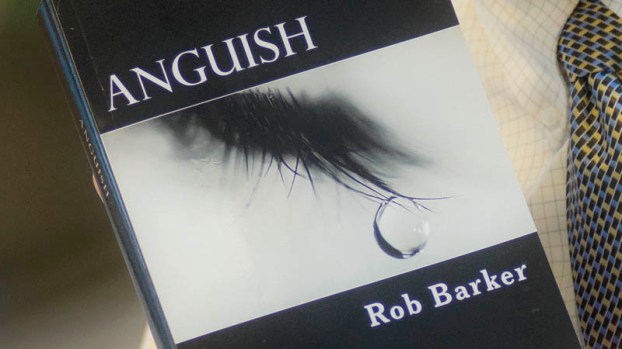 Rob Barker, a native of Ironton and 1996 graduate of Dawson-Bryant High School, recently wrote and published his first book, “Anguish,” a crime drama about a professor trying to discover himself when he receives a phone call that changes things forever.

“I started writing the book in mid-January this year, and I finished it the first week of May,” Barker said. “This was an idea that I’ve had in my head for about seven years, so when I started writing, it just poured out.”

This is the first book that Barker has written, although he said he’s written poetry in the past.

“Writing has always been a strength of mine,” he said. “I feel like I can articulate and speak better from a page than person to person.”

Barker said that the story of “Anguish” is a little different than he originally thought it was going to be and he hopes people will get a lot out of the book.

“People can expect plot twists and suspense,” he said. “There’s several emotions packed into this story and three or four stories going on at the same time in the book that all merge together in the end. What I hope for people to get out of it is adventure.”

A conversation Barker had with his oldest son kick started him to write the book.

Barker said that the feedback he’s heard on the book has been very positive.

“Everyone that’s read it that I’ve talked to thought the story was well-written and emotion filled,” he said. “So far, it’s been very well received, so I’m very pleased with that.”

Barker is currently working on his second book, which he started writing in mid-July.

A book signing for Barker’s “Anguish” is scheduled for Thursday, Oct. 6 at the Ironton Briggs Library. “Anguish” is available at Amazon.com and Barker’s website, robbiebarker.com.