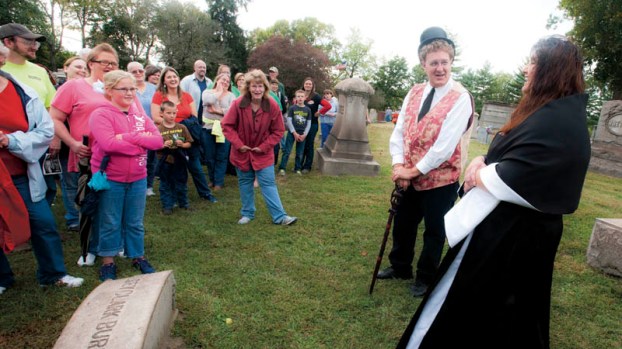 Guests will tour the cemetery, learning about some of the county’s most well-known citizens throughout history from people portraying them for the event.

“The event has been going on for about 18 years total and about 15 years with characters,” Debbie Rogers, cemetery walk organizer and member of the Lawrence County Historical Board, said. “We have 34 characters and around 55 people acting.”

“Frank Goldcamp is actually buried in France in a U.S. war cemetery, but he was born and raised in Ironton and his family plot is at Woodland,” Unger said. “He had three brothers, but is the only one that went into the service. He was killed in 1918 in France.”

A few other characters featured during the walk are Nannie Kelly Wright, an ironmaster and the second richest woman in the world during her time, and the woman for whom the famous Civil War song “Lorena” is based off of.

Rogers started the cemetery walk with her friends Naomi Deer and Bob Price, who have since died, but said she continues the tradition in their honor.

The self-guided walk begins at 5 p.m. at the Woodland Cemetery in Ironton and there will be a shuttle available from Liebert to the cemetery.

Candlelight vigil held for hospitalized Chesapeake officer CHESAPEAKE — A community came together on Monday to pray for the recovery... read more