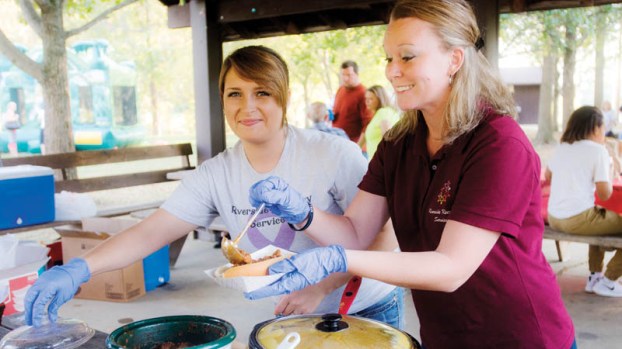 COAL GROVE — Many people gathered at Paul Porter Park Saturday afternoon for an event to raise funds for Chesapeake Police Officer Aaron Christian, who was injured in a Sept. 18 car accident on Ohio Route 7 between Chesapeake and Proctorville and is listed in critical condition at Cabell Huntington Hospital.
The Thin Blue Line Block Party, organized by former Chesapeake Police Chief and current South Point Officer Lenny Abrams, featured live music, vendors, raffles, food and inflatables for the children.
“We organized this event to raise funds for Aaron for his medical expenses,” Abrams said. “All proceeds go to Aaron’s recovery.”
Abrams said that he and a few others planned the event almost immediately following the accident.
“We met here at Paul Porter Park and started brainstorming things that we could do to help,” he said.
Bands that took the stage at the block party Saturday were the Blankenship’s, Southern Cross and Still Water.
About 12 vendors were available at the park, with a setup fee going toward Christian’s medical expenses.
Abrams added that a few of the vendors were even going to donate a portion of the sales to the cause.
Right after the block party, a 5K sponsored by Riverside Recovery Services, was conducted as well, with proceeds also going to Christian’s medical expenses.
More events planned for Christian include a “Guns and Hoses” softball game, which is open to everyone, but geared for police officers and firemen, at the Coal Grove Little League Field, and a Little Miss Blue Line Beauty Pageant, both this coming Saturday, Oct. 22. A target shooting competition is set for the following Saturday, Oct. 29, at Bare Arms indoor shooting range in Ashland.
Entry for the softball game is $15 and includes a T-shirt, hat and trophies will be available.
For more information or to sign up for the softball game, call Abrams at 740-646-2521 or Dawn Easterling at 740-302-7994. For more information and to sign up for the target shooting, call Chelsea Adkins at 304-544-8697. For more information on the beauty pageant, contact Abrams.

PORTSMOUTH (AP) — A recent report from the Children’s Defense Fund has found that Scioto County in south-central Ohio has... read more