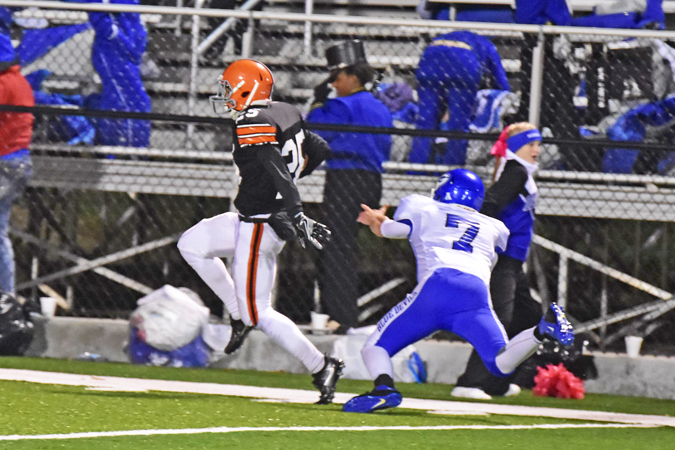 Ironton Fighting Tigers’ defensive back Jourdyn Barrow scoots down the sideline on a 49-yard interception return for a touchdown in a 49-0 win over Gallipolis. (Kent Sanborn of Southern Ohio Sports Photos)

So much for any letdown.
Coming off a tough win last week against Coal Grove and facing a winless Gallipolis team could have spelled trouble for the young Ironton Fighting Tigers.
But that wasn’t the case as Ironton took care of business and routed the Blue Devils 49-0 to clinch at least a share of a second straight Ohio Valley Conference championship on Friday at Tanks Memorial Stadium.
“It was Senior Night so that can be a distraction, but the kids did a great job of staying focused on the task at hand,” said Ironton coach Mark Vass.
“We knew Gallipolis was down this year and we could have taken them lightly, but the kids did what we asked them to do and they played hard. The defense played well and offensively we executed. It was a good effort.”
Ironton moved to 6-0 in the Ohio Valley Conference and clinched at least a share of a second straight league title. The Fighting Tigers are 6-3 after their fifth win in a row.
“One of our goals at the beginning of the year was to win the league and we were able to accomplish that. The league was very competitive and with so many injuries that we’ve fought through, this was a tribute to the kids hard work and character,” said Vass.
Gallipolis (0-9, 0-6) was limited to 146 total yards. The Blue Devils has 84 yards rushing but only 32 in the first half against the first team defense.
Ironton finished with 322 yards — all on the ground — with 209 coming in the first half. The Fighting Tigers attempted just one pass.
Ironton senior guard Levi Langdon said the approach for Gallipolis was no different than any game.
“We just try and pound each and every play. We block and just keep going. Coach Red (Burcham) tells us to communicate and me and (tackle Tyler) Webb talk on every play,” said Langdon.
“It’s just that spirit that the coaches put in the air. We just take it out on the field and try to use it to our advantage.”
Garrett Carrico ran just nine times for 138 yards and three touchdowns. Ethan Duncan added 43 yards on four attempts and the defense and kicking game produced two touchdowns.
The scoring started early when Gallipolis had its punt blocked and John Higgins fell on the ball in the end zone. Tre Neal got the first of six conversion kicks and it was 7-0 last than two minutes into the game.
Jaxson Pleasant recovered a fumble and Ironton went 48 yards in six plays with Carrico running 2 yards for the score and it was 14-0.
After a Gallipolis punt, Ironton drove 41 yards in seven plays as quarterback Jake Isaac did the honors by running the final yard for the touchdown and a 21-0lead with just 35 seconds left in the quarter.
Ironton went 51 yards in five plays for its next score. Carrico carried on four of the plays including the final 21 yards and it was 28-0 with 10:19 on the clock.
Jourdyn Barrow came up with a defensive highlight reel play as he picked off a pass and returned it 49 yards for a touchdown wnd it was 35-0 with 7:54 left in the half.
Ironton ran just one more play in the half but it was a 56-yard gallop by Carrico who change directions and outran the defense for a 42-0 lead and just 4:19 to go in the half.
The second half went quickly with a running clock and both teams staying on the ground. Ironton’s backups ran for 113 yards including a 19-yard scoring run by Higgins with 1:23 to play. Ike Unger got his first varsity point by booting the conversion.
“The big thing for us tonight was to just go out there and do what we do best as brothers. We just want to go out there and get the job done,” said center Vance Day.
Ironton will look to finish the league unbeaten at rival Portsmouth next Friday and also try to secure a postseason playoff berth.
If the Fighting Tigers win, they are expected to finish between the No.6 and No. 8 spots depending on the results of the other teams in the region.
Gallipolis will host South Point.

Panthers hold on to edge Redmen