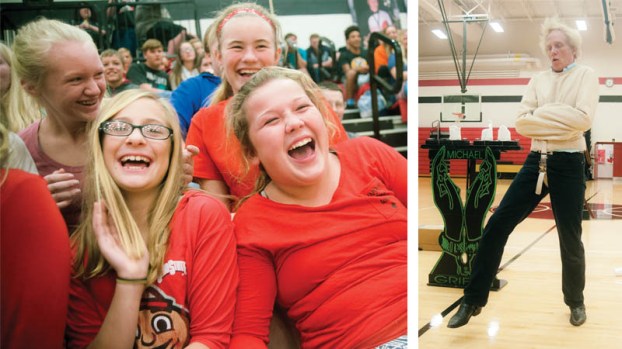 COAL GROVE — World renowned escape artist and magician Michael Griffin was at Dawson-Bryant High School Thursday afternoon to put on an assembly showcasing his skills for both the high school and middle school.

Griffin, who is arguably the best escape artist in the world and the best magician in Columbus, displayed his ability to escape from various restraints, including a tightly wrapped rope around his neck, a chain and lock tightly around his wrists and even a strait jacket. He also swallowed 40 needles and a strand of thread, only to pull all of them out from his mouth on the thread, tested his luck with a hidden metal spike trick in which he did not know where the metal spike was placed underneath four Styrofoam cups before smashing the three without it, and showed off various card tricks.

The assembly was part of Red Ribbon Week at the school, which promotes an anti-drug message and raises drug awareness.

Griffin has appeared on America’s Got Talent, and said most of his acts were self-taught. He is also the only person in the world to ever escape from a Posey strait jacket, which is designed to hurt escape artists.

Griffin also has a worldwide challenge to anyone who can restrain him in a rational way so the escape would be impossible. If anyone is able to achieve it, they would win $100,000.

Keeping with the message of Red Ribbon Week, Griffin told the students that they too can get into their own strait jacket, whether it be drugs and alcohol, stress or anything else that’s going on in their lives, but can get out of it as well by doing the right things.

“If you believe in yourself, find someone to talk to and do the right thing, you too can escape,” he said.