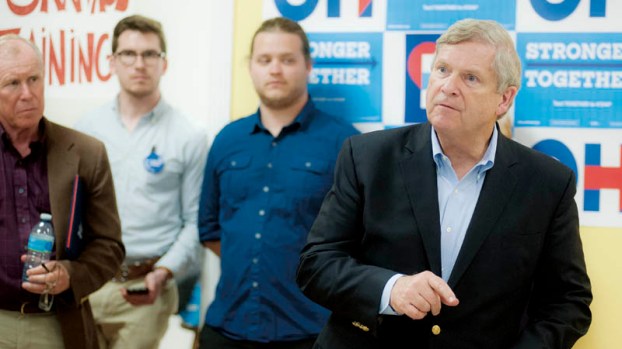 Vilsack spoke about a number of topics, including the drug epidemic, healthcare and Clinton being the clear choice for president over Republican nominee Donald Trump.

“I’m here today because I believe we are confronted this week with the most important decision of our lifetime,” he said. “And there’s only one choice that will allow us to expand and provide leadership internationally. That choice is Hillary Clinton.”

Regarding the drug epidemic, Vilsack said Clinton understands the issue at hand and has the plan to combat it.

“This is a really serious issue, and for the first time, we had a major party candidate talk about this issue” Vilsack said of the drug epidemic. “The candidate who understands that is Hillary Clinton. It’s crippling communities all across the country, and she understands the human price of addiction.”

He laid out Clinton’s plan, saying that it is a $10 billion commitment focused on a number of elements, including prevention in the form of drug education for young people, making sure doctors and prescribers understand completely the risks involved with prescriptions often leading to opioid addiction, monitoring people who have to take multiple prescriptions and expanding access to treatment, which he said is the most important thing about the epidemic.

“We have to figure out ways to redirect people to treatment,” he said. “Addiction is an illness and a disease, not a character flaw.”

Vilsack also spoke about the importance of the Affordable Care Act, stating that because of it, 20 million Americans now have access to healthcare coverage.

“She has the temperament, the experience and the understanding of the challenges we face to effectively lead our country. Mr. Trump has neither the temperament, experience nor knowledge to deal with the challenges we face,” Vilsack said. “Hillary Clinton is committed to a strong and fair economy with a minimum wage increase. Mr. Trump’s plan risks putting us back into a recession and Mr. Trump believes that the minimum wage is too high.”

Vilsack said that there is so much on the line in this election, including appointing Supreme Court justices who protect the rights of all people, and expanding and improving the Affordable Care Act so that many Americans will continue to be covered by healthcare, and that the clear choice is Hillary Clinton.

Introducing Vilsack to the event was Ed Hughes, former director of The Counseling Center in Portsmouth.

Vilsack is the first surrogate to campaign for the presidential race in Lawrence County this year.

More than 4,000 pounds collected in food drive PROCTORVILLE — Kroger has donated $1,000 to the two food pantries near... read more