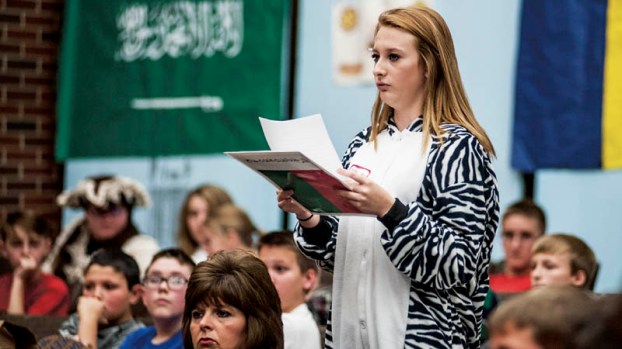 Thirteen countries, represented by local middle school students, gathered in the Bowman Auditorium of Ohio University Southern Monday for Model United Nations, reading proposed resolutions and debating those amongst each other.

“The students pick out which countries they want to represent, and along with their teachers, come up with and prepare resolutions,” Julie Walters, student services coordinator of the Lawrence County Educational Service Center, said. “And it gets them informed about things going on in other countries.”

“It’s important for the kids to learn to speak in front of other students and learn good debating skills,” Trena Haynes, gifted specialist at Rock Hill Middle School, said. “It’s good for the kids who want careers in public relations or politics to gain that experience by speaking about and debating current world issues.”

Haynes said that this was about the 25th year Model UN has taken place.

Awards were given out following the resolution portion of the day.

Fundraiser benefits Ironton In Bloom A sold out show at the Ro-Na on Saturday gave attendees a chance to solve... read more