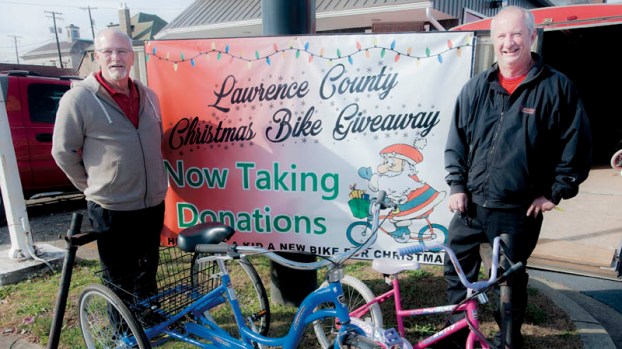 Don Schwartz, left, and John Dickess, are continuing their mission to make sure as many kids as possible receive a bike this Christmas.

“Right now, we have about 76 bikes,” Dickess said. “What we have decided to do, because we can’t commit to the grade schools due to not having enough bikes, is commit to all the Head Start schools.”

Previously, the pair has collected bikes and made a list from the county elementary schools and Head Start schools of families with children who would be in need of bikes.

Dickess said with donations being down this year, only the Head Start schools have commitments. However, if enough donations are made, the elementary schools will be contacted.

“To cover the elementary schools, we need 200 bikes. We’re still taking donations all the way up through Christmas,” Schwartz said. “We’re grateful for every donation that we get.”

Dickess and Schwartz started taking donations in August, and said that the giveaway is all about the children. To date, the pair has given away more than 1,500 bikes over the past five years, and only 64 were given away the first year.

New or lightly used bike donations, as well as monetary donations are accepted and can be dropped off at either Dickess Auto Repair, located at 212 South Sixth Street, or Advance Auto Parts, located at 615 Park Avenue, in Ironton.

The bike giveaway is set for 3 p.m. Saturday, Dec. 17 at the Tri-State Worship Center in South Point. There will be pizza from Coal Grove Giovanni’s, Pizza Hu and Marco’s, refreshments, Santa and Mrs. Claus as well as various Disney princesses and other characters.

A span for the ages

New Ironton-Russell Bridge opens to traffic Cold and rainy weather did not deter crowds from coming out on Wednesday for... read more