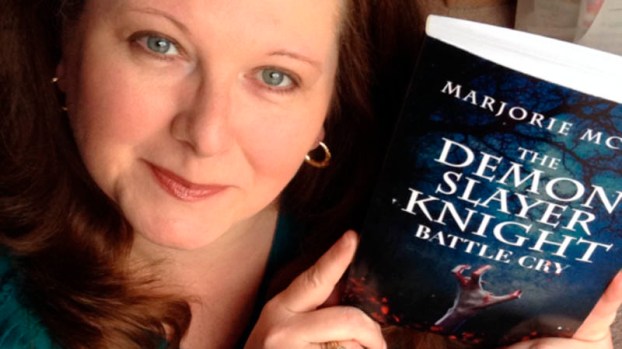 Paranormal novel based on true events, first of trilogy

Inspired by true events, a book written by local author Marjorie McKee, of Kitts Hill, delves into the paranormal world and the fight between good and evil.

The first of a trilogy called The Demon Slayer Knight, Battle Cry, is about a family who unknowingly lives in the house of the devil with their survival hinging on their faith, and was published in 2014. It is highly successful, receiving five stars on Amazon, being sold on the Barnes and Noble website and in select stores, recently being sold at Walmart.com and in select Walmart stores and has even been sold and reviewed in several countries overseas.

“I got the idea for The Demon Slayer Knight trilogy based on my grandparents’ property in Coal Grove,” McKee said. “After doing research, the house was built on a forgotten cemetery around 1850, and the house was haunted.

All of the neighborhood kids growing up didn’t talk about it, but when we were all grown up, we started talking about it more and all had the same things going on in the house.”

McKee said that she was raised by her grandparents and grew up in the home.

“My grandmother died in 2007, and in 2010, I took photos to settle her estate with a new camera,” she said. “That evening, I got home and people came over for dinner. I took the disc out of the camera and put it in the computer and was shocked at what I discovered. We were at a loss for words.”

McKee said the photos, which were not edited in any way, contained paranormal figures and other oddities, which are even featured in the book, and the house was eventually exorcised.

“I’ve always been a writer as a child. I wrote stories, poems and was always telling stories growing up. I started writing The Demon Slayer Knight in 2000 as just a hobby because I wanted a challenge,” she said. “I put it away for a while, and years later, when I was going to get my PhD, my teacher stayed on my back to get it published. It was then published by Tate Publishing, and the rest is history.”

She said the spiritual warfare-based book and trilogy is action packed and contains fore flashes as well as back flashes to get the reader through.

“It will make you angry, it will make you sad, it will bring you to tears and you’ll want to shout in victory at the end,” she said. “It’s a roller coaster of emotions.”

Although McKee found success with her book, she said that poor decisions she made early on in life helped shape her into the person she is today.

“I was a high school drop out who was thinking with my hormones instead of my head when I quit,” she said, dropping out of Dawson-Bryant High School just before her senior year in 1986. “One day when I was 18, I was standing in a food stamp line. Knowing I made a serious mistake by quitting high school, I looked into my baby girl’s big blue eyes. Not only was she crying from a loaded diaper, but also the look in her eyes told me she was depending on me not just for a diaper change, but for a better quality of life altogether. That was a major turning point.”

The next stop she made was to the local GED center, and from there, she eventually received her GED and much more. She went on to receive a PhD and is now a history professor at Ashland Community and Technical College, Kentucky Christian University and an online professor for Hopkinsville Community College.

“I’m a big proponent of following your dreams,” she said. “Don’t let something get you down. If you can dream it, you can do it.”

The original edition of Battle Cry contained more than 850 pages, but was cut down to just over 370 pages for publishing. McKee said she wants to eventually release it in its entirety, which will not affect the trilogy.

McKee said she is taking two years off from teaching to finish the trilogy, with the second book expected to be released at the end of 2017 or the beginning of 2018 and the third to sometime follow.

ASHLAND, Ky. — The holiday shopping season has begun. The Ashland Town Center may have opened Thursday at 6 p.m.,... read more