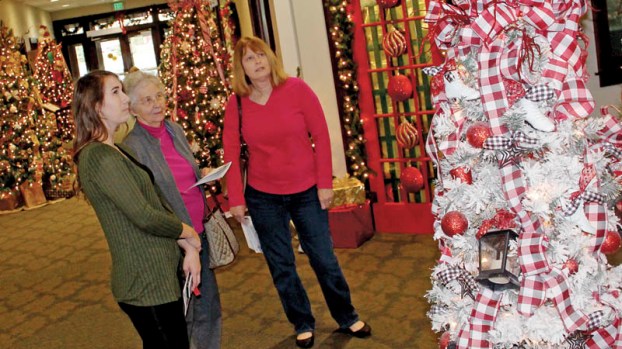 uanita Marcum (center), of Proctorville, with her daughter, Rhonda Marcum (right) and granddaughter, Amanda Marcum, both of Roanoke, Virginia, enjoy looking at the display at the Lawrence County Chamber of Commerce Festival of Trees and Wreaths last week at the Ohio University Southern Proctorville Center.

PROCTORVILLE — Dozens of Christmas trees of all different themes filled the Ohio University Proctorville Center this past week for the second annual Lawrence County Chamber of Commerce Festival of Trees and Wreaths.

“Years ago, I had a friend who had a festival of trees in Huntington, which I worked with her on,” Shirley Dyer, director of the Lawrence County Chamber of Commerce, said. “Since then, I wanted to do one as a fundraiser for scholarships, and we started this here last year.”

The ornaments and other decorations on the trees are donated by various organizations and decorated by people from those organizations. This year, themes ranged from favorite college teams to religious Christmas themes to honoring police.

As people came through the event, they were able to bid on each of the trees to take home from a starting price listed. Also listed was a “buy now” price, in which, if someone purchased the tree for that price, bidding would stop.

“The bids go to the chamber, but the profits that we make from the event go to scholarships for area students to enhance their education,” Dyer said. “The amount of money we made will determine who gets scholarships.”

She added that, this year, there is a certain criteria and a selection on the scholarship winner(s).

Local third graders also decorated trees, which were awarded first, second and third as well, with Fairland West Elementary winning first for their tree, “Christmas with Santa,” Burlington Elementary claiming second with their tree, “Alice in Wonderland,” and Dawson-Bryant Elementary receiving third for their tree, “The Sweet Season of Christmas.”

“Last year, we were really skeptic about doing the festival of trees,” Dyer said. “But then when people came and really enjoyed it, it was a good thing. It really brings the community together.”