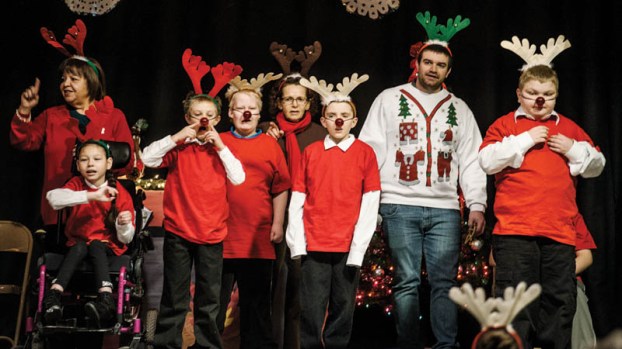 A Christmas tradition of nearly three decades continued Friday as the students of Open Door School performed their annual Christmas program, with a theme of “25 Days of Christmas.”
Principal Kendra welcomed the packed gymnasium to the show before it kicked off with the Intermediate 2 class performing “Rudolph the Red Nosed Reindeer.”
Ellis Litteral was next up, performing NSYNC’s version of “Merry Christmas/Happy Holidays,” followed by the Pre-Vocational 2 class, performing Disney’s “Prep and Landing,” the school’s Bell Choir Group A ringing their bells to the tunes of “Silent Night” and “Rudolph the Red Nosed Reindeer,” students J.T. Jones, Josh Gool and Travis Easter as the Three Elf Amigos performing “Up on the Housetop,” and both the Pre-Vocational classes ending the first half of the show with the “Snow Miser/Heat Miser Song,” from “The Year Without Santa Claus.”
“This Christmas program gives the kids an opportunity to work on something together and it gives them good teamwork skills,” Tim Nunnery, public relations and personnel director of the Lawrence County Board of Developmental Disabilities, said.
The program continued with the Vocational 2 class performing “Jingle Bells,” followed by the schools Bell Choir Group B ringing their bells to “Silver Bells and Jingle Bells.” The Intermediate 1 class then took the stage to perform “Frosty the Snowman” before the Vocational 1 class performed “Home Alone.” The show wrapped up with the Primary 1 and 2 classes performing “Charlie Brown Christmas” and finished with all of the students and staff singing “We Wish You a Merry Christmas.”
The students and staff of the third floor assisted with props and scene changes for the show.
“It gives the kids a chance to go out and perform for the community,” Nunnery said. “It lets them be in the spotlight.”

Nearly 180 people visited the Ro-Na Theater on Saturday morning for what is hoped to be the first in an... read more