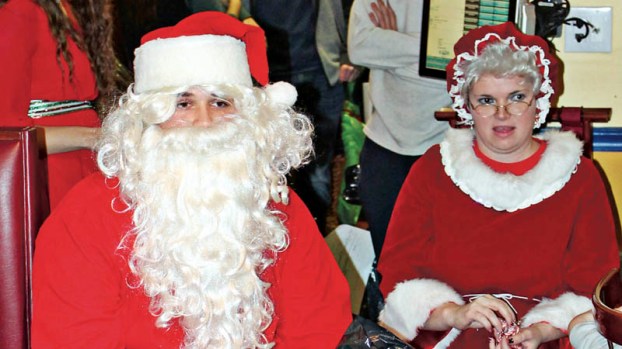 “Through a grant with United Way of Huntington, each student gets $100 worth of clothes at Walmart and is paired up with one of our students to shop,” Kent Stewart, South Point High School U.S. history teacher, Rho Kappa Advisor and co-chair of the Christmas project, said. “Then we go to Casa Grande for lunch and Santa arrives with $100 worth of toys for each student from a wish list that they’ve made.”

Stewart said that the United Way grant provides the $100 for clothing at Walmart, while donations and fundraisers pay for the toys.

11-year-old fourth grader Benji Taylor said he likes being a part of the project.

“I like it because you get to show spirit and get to shop for your own clothes,” he said. “And I like that you get to do it with teens that you know.”

The high school students who helped out with the project said they also take a lot out of the project.

“It makes me feel really good to see the smiles on their faces,” Sophia Morrison, a South Point High School junior who participated in the project, said. “It makes me happy to help out these kids, who may not always be in the best situations outside of school.”

Abbie Ross, another junior who helped with the project, said she agreed.

“I think it’s a great opportunity to see these kids get things that they need,” she said. “You don’t know if they get these things at home, so it’s nice to be assured that they’re going to be warm.”

Stewart said that the project saw an increase in donations this year, which also allowed each elementary school student to get a pair of Nike shoes from Rack Room Shoes in Ashland, which were picked out by the high school students.

Stewart thanked everyone who gave donations toward the project and Casa Grande owner Carlos Ortiz for allowing the group to use his restaurant.

“It just helps give back, not only to our kids, but to the community as well,” Reece Duncan, a South Point High School junior who participated in the project, said. “It shows how to be a Good Samaritan and it helps bring up the kids’ spirits.”

SOUTH POINT — The Columbus Zoo paid another visit to South Point Elementary on Thursday, bringing with them a new... read more