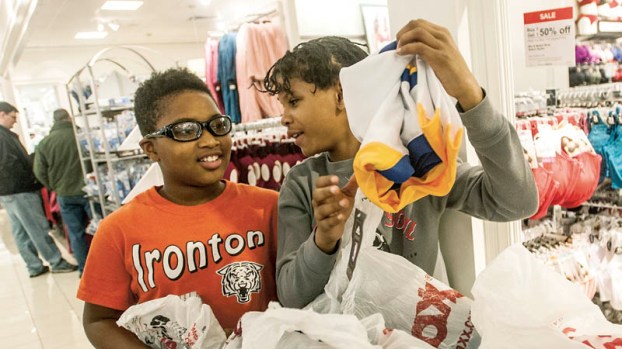 Terrell Mize, right, shows his friend Zavier Henry, right, all the stuff he bought during the Ironton Shop with a Cop event at the Ashland Town Center.

IPD helps students through Shop with a Cop

ASHLAND, Ky. — For the second straight year, the Ironton Police Department helped out 20 students from Ironton Middle School through its Shop with a Cop program Tuesday at the Ashland Town Center.

“We reach out to the middle school, and they picked out 20 sixth, seventh and eighth graders who they thought needed some help around this time of year,” Ironton Police Detective Joe Ross said.

This year, the department raised $5,000, allowing each student to spend $250 on whatever they wanted at the mall, and prior to going to the mall, the students were treated to lunch at the Ironton City Center.

“We take donation for the event all year, and are already have started taking donations for next year,” Ross said.
Anyone who wants to make a donation toward next year’s IPD Shop with a Cop event can drop them off at the Ironton Police Department throughout the year.

A tradition of caring

CMO Christmas giveaway helps those in need CHESAPEAKE — Cars were lined up at the Chesapeake Community Center on Wednesday... read more