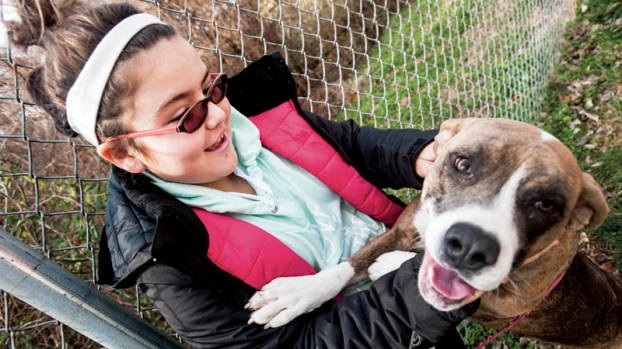 Ten-year-old Marlee Malone visits with a one and a half year-old pit boxer mix, Maggie, at the Lawrence County Dog Shelter. Maggie is currently up for adoption at the shelter.

“I wanted to help the dogs because they’re very friendly and nice, and they deserve to live, not to die,” Malone, who has four dogs, two cats, two hamsters and two turtles of her own, said. “I like that this is a 100 percent no-kill shelter.”

Malone collected supplies at her school, her mother’s job and around her neighborhood to take to the shelter, and through her efforts, caught the attention of Holliday.

“She’s just inspired me so much with her love for animals. This is the season that’s about doing things for others, and Marlee was thinking past that and doing things to help out our furry friends,” Holliday said. “Marlee talked to me about all of this, and I said we’d work together and set a goal to make all of her efforts come to fruition.”

Holliday said that one of the things she wants to do as county commissioner next year is see the shelter adopt some junior members, with Malone possibly leading the effort.

Bill Rigsby, an office worker at the shelter, said the shelter relies on donations such as Malone’s to stay functioning.

“We have a fixed budget, so whatever people bring in, it helps us meet the needs of the shelter,” he said. “Every little bit counts.”

To remain a no-kill animal shelter, The Lawrence County Dog Shelter adopts out dogs and cats, and works with more than 50 rescue operations throughout the United States and Canada. Anyone in Lawrence County interested in adopting an animal from the shelter can do so for $30 per dog and $12 per cat.

Anyone wishing to make a donation to the shelter can drop them off anytime during business hours of 10 a.m.-4 p.m. Monday through Friday. Monetary donations, as well as blankets, dog and cat food, newspapers, cleaning supplies and laundry detergent are accepted.

The City Welfare Mission hosted its annual Christmas giveaway for needy families on Saturday. The charity event, which has taken... read more