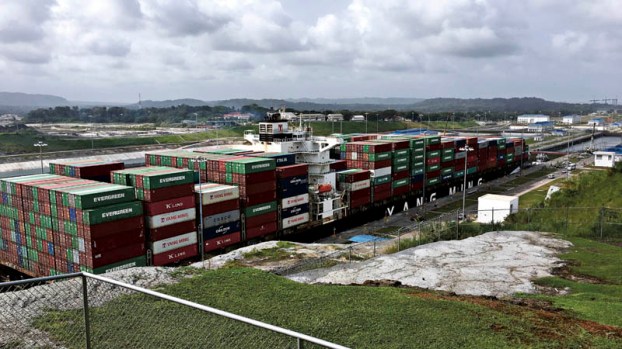 Barnes was present to witness the 500th ship pass through the new Aqua Ciara Locks on the Panama Canal.

Investing in the river

SOUTH POINT — Panama. The word conjures many images. Tropical weather. Lush jungles. Wide-brimmed hats. Iconic canals. But for Meagan Barnes, it means business opportunities and job growth. Barnes, who serves as vice president of marketing and business development for Superior Marine Inc. and as port manager for the Port of South Point, recently attended the signing of a Memorandum of Understanding between the Panama Canal Authority (ACP) and the Inland Rivers Ports and Terminals (IRTP) organizations on Dec. 13 in Panama City.

“Rivers transport so many products to our ports,” she explained. “Yet oftentimes your rivers… aren’t highlighted.

They’re not a part of the talks. It’s always the ocean ports.”

The Memorandum of Understanding hopes to correct that oversight by, among other things, increasing information sharing between the canal authority and river ports.

By understanding what sorts of items, from raw materials to finished products, are being shipped through both they hope to increase river shipping opportunities and associated job growth.

This is especially important, according to Barnes, as the canal undergoes an expansion to meet expected future growth and freight shipping of all sorts is expected to increase 45 percent by 2025. To keep that freight from adding to the traffic on our highways and overwhelming our railway systems, river port traffic will have to help pick up the slack.

“There are ports and terminals all along the rivers where product is being loaded and unloaded,” Barnes said. “Sometimes these products are coming in (as raw material), being value added, and then put on trucks and rail and going back. So there is movement both ways (import and export), so for the rivers to have a relationship with the Panama Canal is really important because we’re going to now have data sharing. We’re going to be able to understand what of our products that are coming up through our rivers are passing through the canal, and then what from our products that we’re pushing out as exports are going to be going through the canal and then look for new business development. So where are products that can come through the canal that then can come up through our rivers. We’re going to be able to have access to that supply chain and then determine how we can grow our business from that partnership. So the relationship with the Panama Canal, that relationship sharing, that marketing together is what this (memorandum of understanding) does. It solidifies that partnership so now we have an advocate with the Panama Canal.”

“That (other shipping) is what we’re trying to grow,” she said. “Because the coal industry is declining, as we all know in this area. We need to diversify, so we’re looking at different things that can be moved on the river from different avenues. Are there other products in bulk that we can go and try to attract that business to replace that lost tonnage? It’s really about replacing some of that lost tonnage from coal. What can we move on the river that isn’t being moved? Or what can we grow that is being moved in smaller quantities? (This could include) all kinds of different metals, any kind of freight bulk, or any kind plastics. The other thing that we’re working on is container on barge. Containers aren’t something that is primarily moved on our waters. But there is such a congestion on our roadways, and with freight being potentially increased by 45 percent by 2025, we have to find some capacity.”

Barnes thinks some of that capacity is going to be on the rivers. In fact, Barnes and her colleagues at Superior Marine are so optimistic about the future growth of river shipping that they are undergoing the largest expansion in their company’s history. They already construct tugboats and lift barges into dry dock for repair, but their new facility will allow them to pull barges completely out of the water with wenches and then, using a rail system, to guide them into a building with a sealed air system where they can then blast and paint the barges.

The project is already adding jobs to the local economy, Barnes noted, explaining that in addition to sourcing local steel and materials they also partnered with local contractor Ridel Wilks for construction work on their new buildings.

The project, which is being financed with the help of a bond from the Lawrence County Port Authority, is nearly complete. Progress on the fifth and final waterway for pulling barges is being delayed until February, when water levels are expected to drop enough to facilitate construction. Once the facility is up and running, the company expects to add a minimum of 15 new jobs.

The company is currently hiring, taking applications for painters and laborers. Barnes said that those interested in job opportunities with Superior Marine can apply at their offices in South Point.