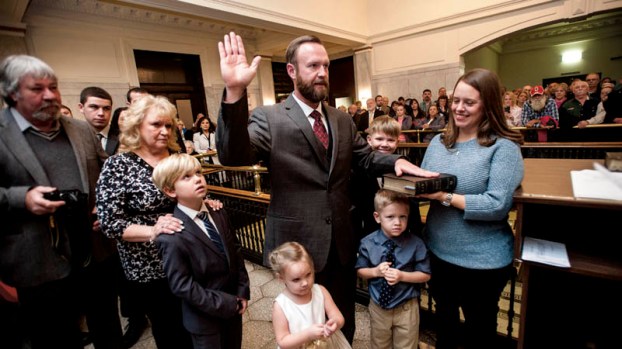 Newest Lawrence County Judge, Andy Ballard, is with his family during his swearing-in.

Serving as the master of ceremonies, Lawrence County Municipal Court Judge Donald Capper welcomed the crowd before the Symmes Valley VFW Post 2761 Color Guard, consisting of Tom Williams, Wendell Murnahan, Randy Harper and Tim Carpenter, presented the colors. Deacon Hugh Scott, of Mount Olive Missionary Baptist Church in Ironton, gave an invocation followed by Dawson-Bryant High School senior Katelyn Ferguson singing the national anthem and the first speaker of the day, honorary guest speaker Judge Marie Hoover, Fourth District Court of Appeals, who spoke about the significance of this election in the county and each candidate. Attorney and director of the STAR program J.T. Holt served as the speaker of the event.

“What a day. I can’t tell you how proud I am to be up here. It’s really a dream come true,” Holt said. “I’ve never seen a group of candidates stick together and recognize a common goal. The entire goal of the whole campaign was to do what’s best for Lawrence County.”

Holt talked about each of the candidates who were getting sworn in and what they mean to the county.

“Mike Patterson is the heart and soul of this group. His whole family believes in treating people right,” he said. “Stephen Dale Burcham is the wise leader of the group who kept everyone focused and kept everyone on task. He’s a wonderful guy, and Lawrence County is truly lucky to have Stephen Dale.”

Holt also pointed out the startup of the Lawrence County land bank, which was spearheaded by Burcham’s office, and said it was one of the most important things to happen to the county.

“I’ve never met somebody who works harder or someone who truly works as hard to achieve a goal they want to achieve. That’s something we need in the commissioner’s office,” he said of Holliday. “She also listens to people, not just people in this courthouse. And she not only just listens, she genuinely tries to help. That’s refreshing.”

Speaking of Ballard, Holt said fairness, integrity and forward thinking ideas are what got him there.

“He stood up for what he believes in and what he thinks is right,” Holt said. “As a Lawrence County resident and native, for the first time in a long time, I’m excited about this county.”

Following Holt, Capper spoke about each of the candidates and Steve Shelton sang “Amazing Grace” before the four were sworn in.

“It certainly proved to be a very emotional day,” Holliday said. “It’s a day that really finalized all of our efforts.”
Burcham said that a day like this is very special.

“My dad will be 86 tomorrow (today), and to be able to administer the oath, it’s really special. My mother wasn’t able to be here, but we were able to get her on the phone for it, which was nice,” he said. “Not every day do you get to spend with your parents, and it’s a very happy day with the other office holders.”

Patterson thanked his family, the office holders and the county, and talked about the need for officeholders being held accountable for what they do.

Ballard said that without the group working together, he didn’t think any of this would have been possible.

“I don’t think we could have done this any other way than as a group,” he said. “We laughed, fought, cried and worked all together for 10 weeks of the campaign all hand in hand with each other’s support and the support of our family and friends. And there’s people that I just met through this election that I wouldn’t know what I’d do without them now.”

After the swearing-ins, the ceremony wrapped up with refreshments.

South Point takes second, while Fairland comes in third Schools from around the region faced off on Wednesday in the... read more