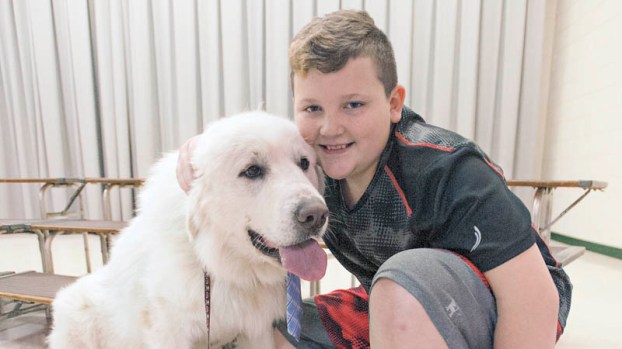 PROCTORVILLE — Duncan Jones was named the winner of the 2017 Lawrence County Auditor’s Office “Top Dog” essay contest Thursday morning in front of his teachers and classmates.

Jones, a fifth grader at Fairland West Elementary, wrote about his one and a half-year-old Great Pyrenees, Captain, to claim the top prize and the honor of having the county’s top dog.

“Captain would be a great representation of Lawrence County because of his strong will,” Jones wrote in his essay. “…He is majestic, regal, magnificent and a great protector.”

The fifth grade class gathered in the school’s gymnasium for Duncan and his dog to be presented the award.

For the past four or five years, the auditor’s office has sponsored the contest, which is open to all third, fourth and fifth graders in the county, to increase dog tag awareness for people to purchase dog tags for their dogs through the office, as well as a chance for the children to talk about their dogs.

“It makes me feel really happy that they chose me,” Jones said. “I’m shivering right now, because of how much I wanted to win.”

Jones and his family got Captain in May of 2015, and, this past November, he was hit by a car, breaking his leg and hip, requiring nine surgeries.

Jones added that, while recovering, his leg kept breaking because of his size and the weight he had to put on it.

“I was so happy when he was recovered and we got to bring him home again,” he said.

Prior to the accident, Captain watched over the Jones family chickens, but now is just a pet to the family.

“He likes going camping, to the park, to the river and to school. When Captain came to school, a kid with special needs showed so much love for Captain, and Captain returned the love,” Jones wrote in his essay. “We decided as a family to start training Captain to visit group homes with troubled kids and teens.”

At the end of the essay, Jones also talked about Captain’s love for McDonald’s ice cream cones and vanilla Frosties from Wendy’s.

For winning the contest, Duncan received a trophy and Captain received a customized Lawrence County dog tag claiming him the “Top Dog.”

The other Fairland West fifth graders who participated in the contest received participation awards and letters from the Auditor’s office.

Student in hospital after run-in with vehicle

PROCTORVILLE — A student was taken to the hospital after a run-in with a vehicle on Tuesday. According to the... read more