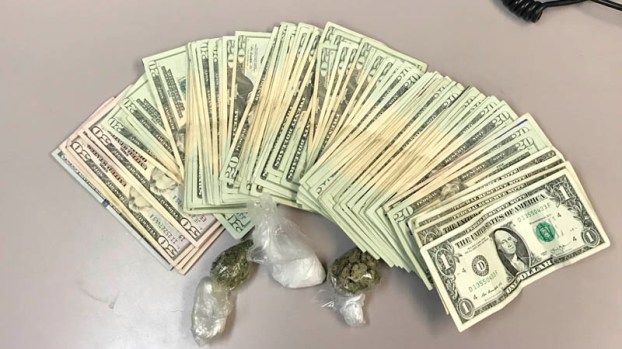 Police seized 7.5 grams of marijuana in two packages, 8.2 grams of methamphetamine, and $2.039 in cash during a traffic stop turned drug bust on Saturday night.

Ironton Police Department’s newest K-9 made his first bust this past Saturday. Goose, with handler Sgt. Brian Pauley, alerted on the vehicle during a traffic stop by Patrolman Steve Wilson at 11:42 p.m. Jan. 14, near the corner of Sixth Street and Ellison, explained Ironton Police Captain Joe Ross. During a search following Goose’s hit on the vehicle, the officers discovered two bags of marijuana with a total weight of 7.5 grams, one bag of methamphetamine with a weight of 8.2 grams and $2,039 in cash.

The passenger in the vehicle, Walter Briggs II, of Detroit, was arrested for trafficking in drugs, and aggravated trafficking for possessing the drugs within 1,000 feet of Ironton High School. The driver, Jessica Smoot, of Proctorville, was charged with possessing drug abuse implements after officers discovered several syringes in her possession.

“This is one of the first busts our new K-9, Goose, has done,” Ross said, adding that the department was proud of the dog’s work in helping take the drugs off the street.

Pauley said that Goose has been with the department since June, and received his certification “at the end of August” from K-9 Solutions Center. While it isn’t the first time Goose has alerted on a vehicle since becoming certified, this is the dog’s first “substantial bust” according to Pauley.