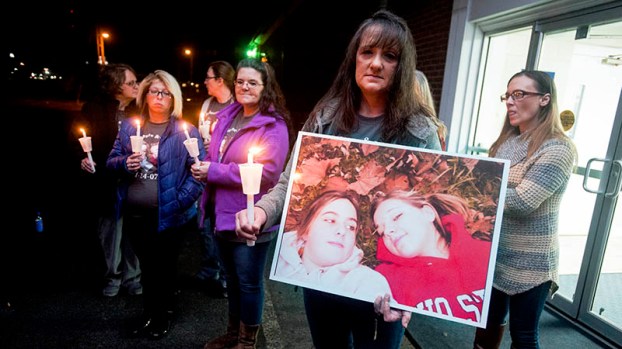 Brenda Littlejohn, mother of the late Jamiesue Barker, holds a photograph her daughter and friend Lacey Parnell during a remembrance service Tuesday evening.

A time for remembrance

A decade after one of the worst tragedies in Ironton and the Tri-State, family and friends gathered at Central Christian Church Tuesday evening to remember Jamiesue Barker and Lacey Parnell, who were the victims of a train accident on Jan. 24, 2007.

Jim Williams, teacher at Ironton Middle School and associate at Central Christian Church, gave a welcome to the crowd.

“This service is to remember two loved ones and family members in one of the most terrible tragedies our area has ever known,” Williams said.

Williams proceeded to read a psalm and say a prayer before a DVD of photos of Barker and Parnell was played.

“Words can’t explain what it means for people to still love and support the girls 10 years after it happened,” Brenda Littlejohn, Jamiesue’s mother, said. “They were the most amazing little girls who touched so many lives. For people to come out and still support and still love them, it touches my heart.”

From the church, the crowd moved outside to light candles in remembrance of the girls and launch balloons in their honor.

“They were the life of the party, and always put a smile on your face,” Alli Freeman, a friend of the girls who was with them during the accident, but survived, said. “They could make you laugh like no other.”

Littlejohn said that although not always a big event, she has done something on the anniversary each year since the accident.

Cranes lower segment to river, beginning dismantling A 94-year-old connection between Ohio and Kentucky has been severed. Crews removed the... read more