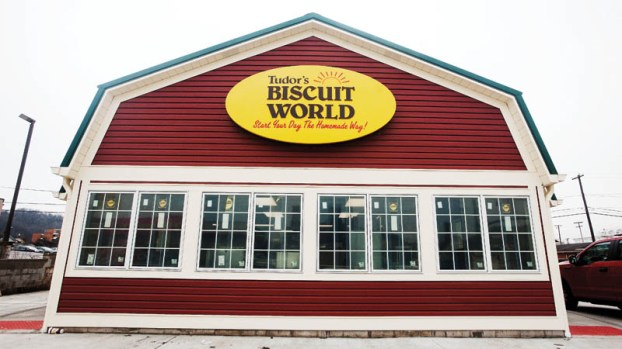 New Tudors of Ironton located on the corner of Park Avenue and Sixth Street.

After a few initial setbacks, Tudor’s Biscuit World in Ironton is just a few short weeks away from opening its doors.

“There’s not a hard date to open yet, but it’ll be within a few weeks,” Greg Atkinson, vice president of Tudor’s, said. “We’re in the last little stage of it all coming together.”

Initially, there was a possibility of opening at the end of December last year. However, Atkinson said that the holidays made it difficult with equipment needing to be shipped from all over the country.

“Some of the manufacturers we work with have limited schedules during the holidays and the month of December,” he said. “And then the month of January is spent catching up a lot of times. But we’ll be open soon.”

On Monday and Tuesday this week, open interviews were conducted, receiving about 280 people throughout the two days.

Atkinson said about 30 employees will be hired to the staff initially.

“The city of Ironton has been great to work with. They’ve been very helpful with making sure we have everything we need,” Atkinson said. “And Ironton is a great match for who we are in terms of our menu. We have good, home-style food at a great value. We serve good, hearty portions at prices as low as we can keep them. You can get breakfast or lunch for just a few dollars.”

Tudor’s opened its Ashland, Kentucky, location about three years ago, and according to Atkinson, has been looking to open a restaurant in this direction ever since.

“We just needed a location,” he said. “And this seemed to fit the bill.”

Prepping for the ACT

For college-bound high school students, there is a boogeyman of a test that weighs upon their mind– the ACT. But... read more