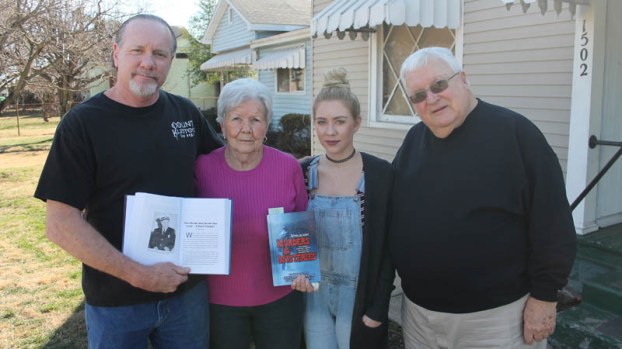 In one of the worst tragedies to occur in Ironton, former Ironton Police Chief Eugene (Gene) Markel was killed during a jailbreak attempt at the Lawrence County Jail on Dec. 2, 1966.

Local author Keith Kappes wrote about the incident and the impact that Markel left on the community in Appalachian Murders and Mysteries, an anthology made up of about 19 different authors, published by the Jesse Stuart Foundation recollecting numerous occurrences from the Tri-State.

Kappes said he wrote the story because he lived through the incident at the time, managing the Herald Dispatch Lawrence County office after getting his start as a reporter at The Tribune.

“I got a call from my editor asking if I knew what happened at the jail,” Kappes said. “Chief Markel and an Ironton patrol officer were responding to a call from the sheriff about a jailbreak attempt.”

On that morning, the sheriff was transporting a prisoner out of town, leaving Markel and patrolman Charles Giles to go to the jail to respond to the incident.

Not knowing what was going to happen when they walked into the jail, Markel had an escaped inmate in a hallway when another escaped inmate, Carl Halleck, fatally shot him in the head.

Giles was shot as well, leaving him permanently paralyzed.

“I followed this story through two trials. All the way to Circleville, Ohio,” Kappes said. “A few years later, I was working for the Associated Press (AP) and was asked to cover a prison riot. I went there with a group of other reporters, and when we were listening to these convicts, a scuffle broke out in a nearby hallway. The warden asked us to leave and then come back when they got it under control. One inmate kept looking at me and I couldn’t figure out why.”

The inmate who recognized Kappes was Halleck.

Kappes said he was shocked to see Halleck’s name on a list given to him by the prison after covering the murder of chief Markel.

“The story became very personal to me, because I was a reporter covering the story, and I had come to know and respect Chief Markel,” Kappes said.

On Monday afternoon, Kappes presented Markel’s family with signed copies of the book.

Markel’s wife, Joyce Markel, said she was very appreciative of the chapter of the book dedicated to her husband.

“It’s been a long time coming, but I think it’s rather nice to have this about him. I’m anxious to read it,” she said. “He loved his job and he loved what he did.”

Gary Markel, Chief Markel’s son, who was 3 at the time of the murder, said the chapter of the book on his dad meant to him and his family.

“I think it’s awesome. I want to thank Keith for getting the ball rolling,” he said. “I was only 3 at the time, but I still love him and he’s still my hero.”

Appalachian Murders and Mysteries is available online at Amazon, Barnes and Noble and through its publisher, the Jesse Stuart Foundation.

McCreery to perform at PAC