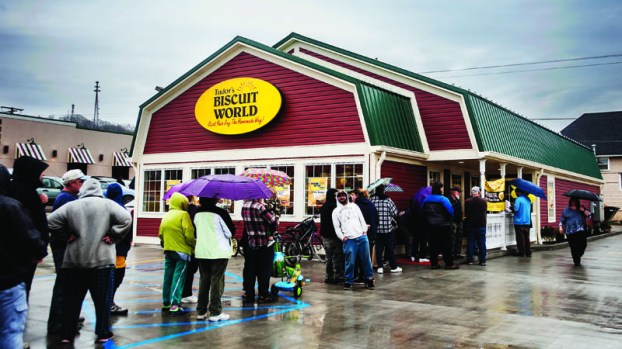 Residents of the Ironton community got their first taste of the new Tudor’s Biscuit World Monday evening, as the store hosted a ribbon cutting and open house before officially opening up for business today.

“We’re all excited about the community of Ironton and we think it’s going to be really good for us,” Tudor’s CEO Oshel Craigo said. “We’re thrilled to death to be open for this open house, and we hope the community will accept us. We’re hoping for a good, long, successful business.”

People started lining up outside of the restaurant Monday about an hour before the open house began in anticipation for the free sausage biscuits, BBQ sandwiches and beverages Tudor’s offered.

“We always do an open house when we open a new restaurant. We usually have music, but we were unable to get any today, which is disappointing,” Criago said. “But we feed everyone their choice of sandwich and beverage. Historically, we’ll usually give away about 600 biscuits at an opening.”

Craigo said the initial hours of the store beginning today are 5:30 a.m.-2 p.m. Monday through Saturday, and 7 a.m.-2 p.m. on Sunday. However, he added that after approximately the first six weeks, the restaurant will remain open until 7 p.m. and more hires would most likely be made.

The Ironton Tudor’s Biscuit World is the 74th Tudor’s, which operate primarily in West Virginia, Ohio and Kentucky, and the second Lawrence County location, adding to the Tudor’s in South Point.

As part of the ribbon cutting and open house, Shirley Dyer, of the Lawrence County Chamber of Commerce, presented a certificate to the Ironton Tudor’s welcoming them to the county.

Dyer said although the Ironton Tudor’s is not yet a part of the chamber, they will be in the near future.

“We think it’s really important to be a part of the business community where we operate,” Tudor’s Vice President Greg Atkinson said. “If there’s a chamber in the area where we operate our stores, we’ll join.”

Bill Dingus, executive director of the Lawrence Economic Development Corporation, was on hand Monday as well, and said that he was very happy with how everything turned out.

“We’re very pleased and proud for them to be part of our community now,” Dingus said. “It’s beautiful to see everything come to fruition after all the hard work that’s gone into this.”

The Ironton Tudor’s Biscuit World is located at the corner of Park Avenue and Sixth Street across from Dickess Auto Repair downtown.