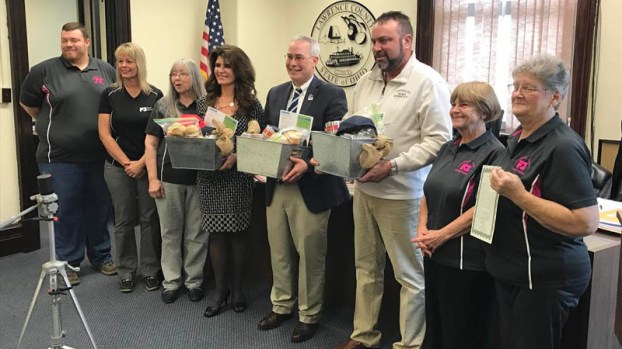 The Lawrence County Farm Bureau was on hand at the meeting to talk about the significance of the week as well as everything that the bureau does.

“We want to inform people where everything in life comes from, which is the farm,” Linda Fuller, with the Lawrence County Farm Bureau, said. “We need to educate people on agriculture, and we work hard on that.”

She added that in today’s society, farmers have it rough and that a lot are quitting as a result of that.

“So many children don’t understand where their food comes from,” she said. “The Farm Bureau really works hard on trying to get the word out.”

The Lawrence County Farm Bureau, along with the Jackson County Farm Bureu, were also recently recognized as outstanding counties at the national conference in Phoenix Arizona.

He added that a three-month study involving the county EMS would be conducted in the near future that will calculate the financial burden on the department as a result of the growing number of overdoses.

Lawrence County Sheriff Jeff Lawless said that as of Monday morning, the county has seen 66 overdoses since Jan. 1, with at least four being fatal.

Lawless also informed commission of seven new cruisers the sheriff’s department recently received, with all of them currently being out on the road.

Darlene Green, director of the Chesapeake Senior Center, told commission of the upcoming Senior Day, set for Tuesday, May 16 at the Lawrence County Fairgrounds. That week, commission will conduct their weekly meeting at 1 p.m. at the event.

Lawrence County Treasurer Stephen Burcham also addressed commission, and said that the first half tax collections were going great. The office will spend the next week or two getting everything finished up to send to the auditor’s office. Next half’s tax collections are due July 7.

Newly hired Lawrence County Department of Job and Family Services Assistant Director Rich Blankenship thanked commission for hiring him to the position, and said he was looking forward to working with LCDJFS Director Terry Porter and the other employees to serve the citizens of the county.

Also in the works is the senior center potentially moving to Proctor’s Landing when it opens, which would double the space the center currently has in the modular unit next to the Chesapeake Community Center. Commissioner DeAnna Holliday thanked County Engineer Patrick Leighty and the county crews for their work following last week’s storms, and Commission President Bill Pratt said that Casa Grande Mexican Restaurant recently received its liquor license, and is currently serving alcohol.

• Approved and signed the weekly invoices and certificates as presented by the auditors office.

• Approved and signed the Resolution authorizing the submission of the Lawrence County FY 2015 CDBG Allocated Program Grant, as requested by Cindy Anderson , CAO.

• Recieved and referred the petition from Jason Morris regarding 748 Private Drive 5087 to the County Engineer, petition states that they would like to turn road over to Rome Township.

Businesses in village would pay $1,000 per year, $300 per month CHESAPEAKE — The Chesapeake council voted Monday to set... read more