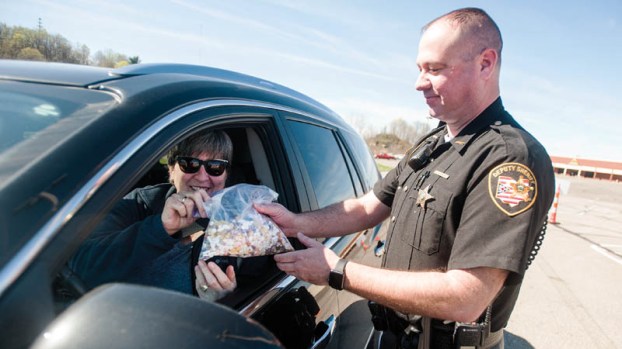 Drug Take Back Day a success

Despite the numbers being down from 2016, Lawrence-Scioto Solid Waste District Director Dan Palmer said this year’s Lawrence County Pharmaceutical Drug Take Back Day was still a success.

“Our overall figures were down this year, but I was pleased with it,” Palmer said. “I thought we’d have a little better turnout, but I think we did well.”

The event, which took place this past Saturday in the Ironton Hills Plaza parking lot, brought in 45 vehicles, and 52 lbs. of pills, 40 lbs. of sharps/syringes and 20 lbs. of liquid medications were collected.

“Talking to people who came through, they thanked us for having this event,” Palmer said. “A couple of them told me that in the past, they would have just flushed them. But people are changing and trying to do what’s right.”

The district had its drug take back event in Scioto County the day before, which brought in 47 vehicles and collected 50 lbs. of pills, 30 lbs. of sharps/syringes and 45 lbs. of liquid medications.

“We aren’t going to have another drug take back day until next year in the spring, but there will be two next year because that’s part of the Household Waste event we do at Dow Chemical every two years as well,” Palmer said. “It’s a free way of properly disposing medications for the citizens of Lawrence and Scioto counties.”

Assisting the district with the event were the Lawrence County Sheriff’s office and Our Lady of Bellefonte Hospital.

“This event helps rid people’s homes of unneeded drugs and helps prevent them from being a target of drug addicts and crime,” Lawrence County Sheriff Jeff Lawless said. “It also helps keep people from flushing these drugs down toilets or pouring them down drains that pollute our waterways, so we’re happy to participate every year.”

Another solid waste district event on the horizon is a tire amnesty day, set for 10 a.m.-2 p.m. Friday, April 21 at Ironton Hills Plaza, where people can bring tires to be properly disposed of.

“We’ll be accepting tires from cars and light pick-up trucks, but no commercial tires,” Palmer said. “And the tires must be off the rims.”

For Scioto County, the tire amnesty day will be 10 a.m.-2 p.m. Friday, April 28 at the Lowe’s in Wheelersburg.

“We still have money left from a grant we got from the Ohio EPA to do these tire amnesty days this year,” Palmer said. “And there’s no cost to the residents of Lawrence and Scioto counties.”

A solid location for a business

Former bank building still boast of two safes Some buildings are safer than others and some buildings have a safe.... read more