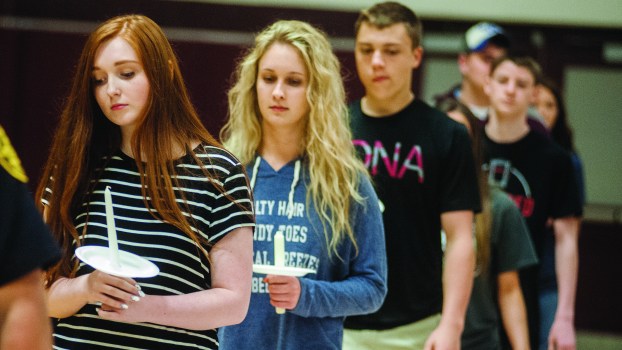 ASHLAND — The students at Paul G. Blazer High School didn’t have a typical school day on Wednesday, as the Ashland Police Department hosted a “Ghost Out” to raise awareness about drunk driving with the school’s prom happening this weekend.

“We started about a week ago, putting up posters and making DUI statistic announcements at the school,” Maj. William Hensley, division commander at the Ashland Police Department, said.

The day began with a car being brought in that was crushed in an actual drunk driving accident.

Following the car, a Grim Reaper went around the school during the day and chose 12 pre-selected students, who were chosen as victims in drunk driving accidents.

“The students who were picked knew they were going to be picked, but none of the other students did,” Hensley said. “It’s a good demonstration to show that every 30 minutes, a teen or young adult is killed by a drunk driver, or drunk driving.”

The students who were chosen wrote their own obituaries, which were then read by the Rev. Ike Nicholson at an afternoon assembly in front of the school. Also part of the assembly was a few guest speakers and a video.

“This event definitely encourages students not to underage drink and drive, or drink and drive at all,” Rigsby said. “We learned quite a bit about the causes and repercussions of drunk driving.”

Rymer said she agreed, and enjoyed being a part of the day.

“I think it brings awareness of the seriousness of drinking and driving,” she said. “It may not seem like a big deal or that serious at the time, but you could die. Making smart decisions is really important if you don’t want to die.”

Hensley said that this was his first year doing the event, but that the department tries to put it on at the high school every two years, with the last one taking place in 2015.

CIRCLEVILLE — Luke Diamond of Ironton is the recipient of the Vandermark Memorial Scholarship in the amount of $4,000 from... read more