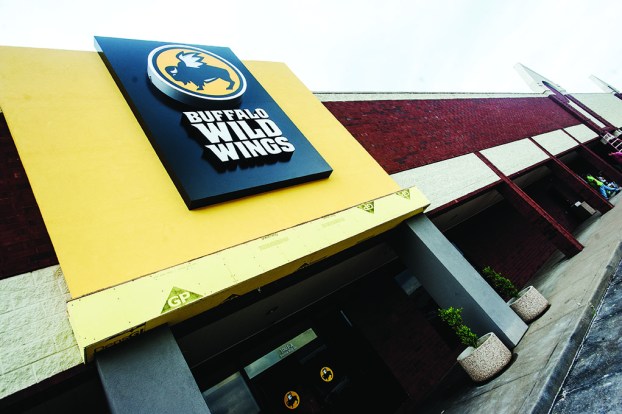 After a week being closed for remodeling and expansion, the Ironton Buffalo Wild Wings was back open for business Thursday.

The restaurant now carries the franchise’s “Stadia” design concept, which gives the atmosphere the feel of being in a sports stadium.

“We’ve 100 percent completely remodeled inside and out,” Stacie Staker, director of marketing for Schmidt Restaurant Group, said. “Everything is new; the floor, walls, décor, TVs, everything.”

The changes began early this year with the addition of another dining area, complete with a full bar, which will be used for private parties or restaurant overflow. Last Thursday, the restaurant closed for a week while the updates were done on the main part of the restaurant.

The Ironton Buffalo Wild Wings opened in March of 2007, and part of the franchise agreement is to reinvest in the restaurant after so many years.

“We felt like this was a good time to make these changes and updates after 10 years,” Schmidt said. “They have a bare minimum of what the restaurants have to do, but we went above and beyond what we were obligated to do with these updates.”

“We’re so excited about everything,” Nancy Howell, general manager of the restaurant, said. “And with the expansion area, there’s really no other places around to have private parties and things like that, so I think people will be really excited about a place that they can have fun in.”

Next Thursday, May 18, the restaurant will have an official kick-off for the reopening with 93.7 The Dawg broadcasting remotely from the restaurant from 5-7 p.m. During the event, five sets of free wings for a year will be given away, as well as the opportunity to win other prizes.

Schmidt Restaurant Group, which is based in Portsmouth, owns five Buffalo Wild Wings, 40 Wendy’s and one LaRosa’s Pizza in Ohio, Kentucky and West Virginia.

SAN FRANCISCO (AP) — Zack Cozart had two extra-base hits, including an RBI double in the top of the eighth... read more