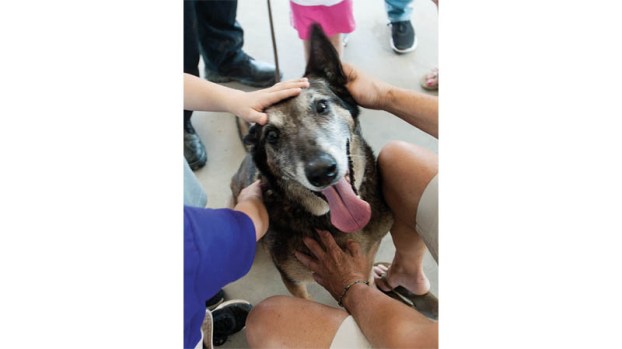 After 10 years of service with the Lawrence County Sheriff’s Office, Deputy Scott Wilson’s K-9 Hemi, a 13-year-old Belgian Malinois, retired on Friday, being recognized with a party at the county 911 station.

“He started here in 2007, and I’m the second handler of Hemi,” Wilson said. “Deputy Charlie Hammonds first had Hemi for about a year and a half or two years, and I took him over in early 2009 and have had him ever since.”

Wilson added that Hammonds had to give Hemi up when he took a job at Collins Career Technical Center, but that Hemi was still young enough to be able to work with a new handler.

“We’ve been at the schools since I got Hemi,” Wilson said. “We’d search lockers, vehicles and keep the drugs out of the schools.”

Wilson said about 90 percent of the work that he and Hemi have done over the years was in the schools, where they checked on every campus in Lawrence County.

While Wilson said he and Hemi don’t begin checking lockers until middle school and lockers and vehicles at the high school level, going to the elementary schools was more of a show-and-tell event, interacting with the students. He said, about four years ago, a program was started at Burlington Elementary, where third grade students would read a book about an officer and his K-9, and at the end, Wilson and Hemi would come out and bring the book to life. The program was also later started at South Point Elementary and was done at Dawson-Bryant Elementary this year for Dr. Seuss Day.

Hemi enjoyed the first day of his retirement of Friday, receiving numerous dog treats as well as his being recognized for his service.

Lawless also spoke about the impact Hemi and Wilson have made on the schools and in the community.

“Hemi and Scott have been instrumental in presenting 25 drug cases to the prosecutor’s office, which have resulted in convictions. Many other times, drug residue or drug paraphernalia have been discovered by Hemi, but did not rise to the level of prosecution,” Lawless said. “…Hemi has become well loved by all who know him. School students, staff and regular citizens have all sent well wishes to Hemi, and have wanted to hug him one more time before he retires.”

Thanks to Lawless and the county commissioners, it was approved for Hemi to continue living with Wilson after his retirement.

Lawless also presented Wilson with a proclamation, signed by the county commissioners, recognizing Friday, May 26, 2017, as Hemi Day in Lawrence County.

Wilson is also currently in the final steps of training the new Sheriff’s K-9, Kilo, a 1-year-old German shepherd, which he will also be the handler of.

Kilo will complete training and begin his official service with the sheriff’s office the second week of June.

Former Sheriff’s K-9 to be honored on memorial