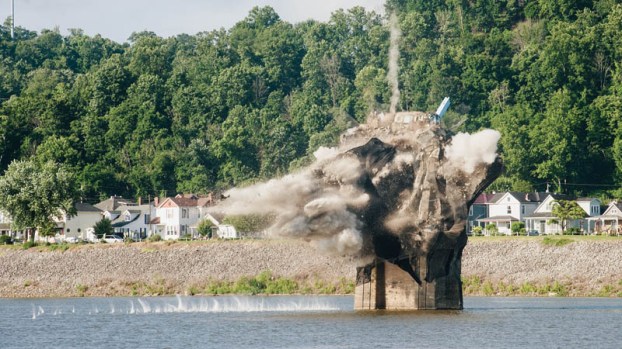 The first of three piers of the Ironton-Russell Bridge is exploded into pieces early Wednesday morning. The final two piers will be dismantled Thursday.

The old Ironton-Russell Bridge will soon be just a memory, as the last remaining piers from the span are in the process of being demolished.

Crews from Brayman Construction and Advantage Blasting and Demolition detonated Pier C, the first Kentucky pier, Wednesday morning with Pier B, the Ohio pier, and Pier D, the second Kentucky pier, being demolished this morning.

“The piers are all caged in so the concrete and materials don’t blast everywhere during demolition,” Kathleen Fuller, Ohio Department of Transportation District 9 public information officer, said. “It makes it safer and a lot easier to clean up.”

Fuller said the caging of the piers was done prior to the blasting as part of the prep work.

With the blasting of the piers, minimal to no parts of the old span will be visible from above water.

“For the demolition Wednesday, there was just one road closure temporarily in the morning, in the Riverside Drive area of Russell,” Fuller said. “On Thursday, there will be some more brief localized closures with the demolitions being on the Ohio side, from Second Street to the river.”

The third and final step of bridge demolition will be underwater detonations to blow up the remaining bottoms of the piers, which Fuller said would take place sometime within the next two weeks.

“You won’t be able to really see anything with the underwater detonations other than some ripples in the water,” Fuller said.