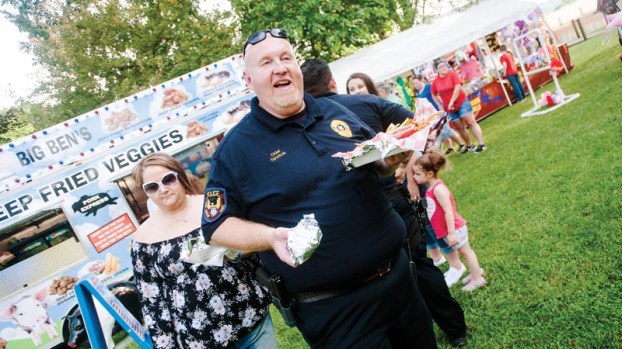 Event is now in its fourth decade at Paul Porter Park

COAL GROVE— Coal Grove’s annual tradition of Family Fun Days continued this weekend at Paul Porter Park, and was filled with live entertainment and fun for everybody.

“I believe this is the 41st year Coal Grove has put this on,” Coal Grove Mayor Larry McDaniel said. “It started in 1976 and started as a fundraiser for the fire department. Now, it’s the village of Coal Grove and the Coal Grove Betterment Club who puts it on.”

The festivities began on Saturday,  with the opening ceremony by McDaniel, VFW Post 8850 and Bridgett Wade. Others who performed Saturday included Abby Shae Kimball, Katie Ausmus, the Country Knights and Craig Haney.

“It’s just a family-oriented event for our village to come out and enjoy,” Vickie McDaniel, Coal Grove Betterment Club president, said. “For our little village to be able to have something this big is pretty amazing.”

“I think the community really enjoys it,” Vickie McDaniel said. “I like seeing all of the smiles and people shaking hands. It’s something that people who haven’t seen each other in a long time come together to and we get a lot of people come in from out of town.”

Besides the live entertainment, several vendors are set up, including AVON, Collins Career Technical Center, Memorial United Methodist Church and more, along with multiple options for great fair-style food. Inflatables are also set up for the children to enjoy with the playground that is already in place at the park.

Both Larry and Vickie McDaniel said the event wouldn’t be possible without the help of the Ironton Municipal Court Community Service Program, who cut grass and trimmed weeds and trees, and the village’s employees, who helped set everything up during the week leading up.

Vickie McDaniel said the fireworks this year will be a little different, as people will have to look toward the village instead of toward the woods due to a new location they are being set off from.

All proceeds from Family Fun Days go toward the Coal Grove Betterment Club’s Christmas light and decoration display at the park for the holidays.