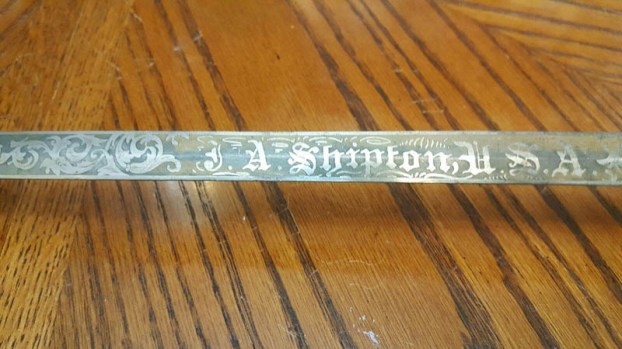 Mark Kellen, of Rome Township, has a sword his father found in a Texas pawn shop that may belong to U.S. Army Brigadier General James Ancil Shipton, of Ironton.

Piece of local history found in a Texas pawn shop

ROME TOWNSHIP— A piece of history relating to Ironton is back in Lawrence County after a long, decorated journey.

Mark Kellen, of Rome Township, has a sword that most likely belonged to U.S. Military Brigadier General James Ancil Shipton, who was born March 10, 1867, in Ironton to James Pogue Shipton and Ruth Irons Shipton.

“In 1956 or 1957, my dad, Freddie C. Kellen, went with my mom to a pawn shop in Fort Bliss, Texas,” Kellen said. “He saw this sword there, liked it and paid $10 for it when he bought it. Over the years, he had no idea who it belonged to, but just that it came from the Spanish-American War era.”

Kellen added that back in 2008, his father looked at the name on the sword online, which is J.A. Shipton, and saw that he was an artillery officer, and in February of this year, Kellen started looking more into Shipton’s name to discover that he was born in Ironton and there is actually an award named after him for the Air Defense Artillery Branch of the U.S. Army, the branch that Shipton was known to create.

Shipton graduated from the U.S. Military Academy in 1892, and was commissioned into the Artillery Corp, specializing in the Coastal Artillery Corp. From 1898-1899, he served as a military Attaché in Brazil, where he became good friends with Teddy Roosevelt as Roosevelt toured the area and explored the River of Doubt. Shipton also served as the Major of Volunteers in the Philippine Campaigns of the Spanish-American War and Philippine Insurrection. In 1917, he was promoted to Brigadier General.

Around that time, the U.S. had no air defense artillery and saw a threat to its forces due to the emerging technology of flight. Shipton, along with two captains, were sent to study the air artillery tactics of both the English and the French forces. On July 26, 1917, Shipton and Captains Glenn Anderson and George Humbert formed the first Anti-Aircraft Corp in the American Expeditionary Force with a mission to create the first anti-aircraft force in the U.S.

Shipton’s philosophy was to create a deterrent, rather than trying to hit individual planes, with the goal not to shoot down planes, but to protect the ground targets by creating a deterrent.

According to the Army’s Field Manual 44-100, the mission of the Air Defense Artillery is “to protect the force and selected geographical assets from aerial attack, missile attack and surveillance.”

“I reached out to Jon Bernstein, the director at the U.S. Air Defense Artillery Museum in Fort Still, Oklahoma, who verified the sword and said he was 85 percent certain that the sword belonged to Shipton,” Kellen said. “We also found some of Shipton’s family in Longview, Texas, three great-granddaughters, who have more artifacts of his and writings.”

Kellen said he and his family are planning on going down to Longview, Texas, to meet with Bernstein and Shipton’s three great-granddaughters later this month with the sword.

“We don’t know how the sword ended up at a pawn shop in Fort Bliss, Texas, but after he died, his wife sold a bunch of his items, so we’re assuming this was one of the items she had sold,” Kellen said. “The military has very, very few artifacts from General Shipton, so this is a very significant find.”

Kellen said he plans on loaning the sword to Bernstein to display in the museum for some time, and that he also plans on finding out if Shipton still has any family left in this area.