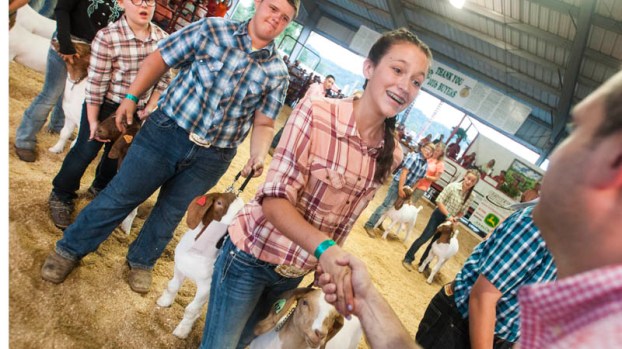 ROME TOWNSHIP — Market goats were the center of attention Monday evening at the Lawrence County Fair, where the grand and reserve champions were named.

Claiming the top prize of grand champion for the market goats was Lauren Wells, 13, of the Willow Wood Wranglers 4-H club.

Wells said she was wearing a lucky belt that helped her win the market goat grand champion honor.

“I have a lucky belt on that my friend got when she won the grand champion for pigs last year and let me wear,” she said. “It feels great to win.”

She added that her favorite part about raising goats is taking care of them and going out every night to play with them.

“It’s really special to have an animal that loves you and you love them back,” she said. “But the worst part about it is when we have to sell them.”

“It feels amazing,” he said of becoming the market goat reserve champion. “And it’s great to be able to raise the goats at our own place, Daniels’ Show Goats.”

Daniels, who also won senior showman for his breeding goat on Sunday, said his favorite part about raising goats is birthing season.

Before the grand and reserve champions were named, nine classes of market goats were shown based on weight.